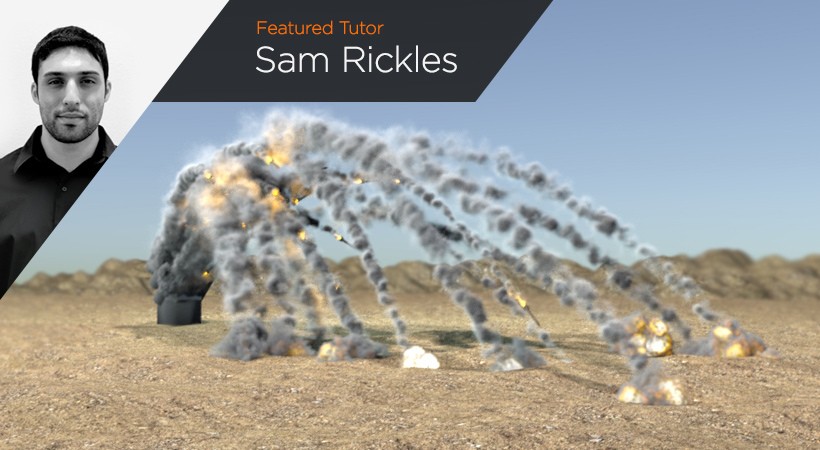 With a wide range of experience in the VFX industry, starting in his high school years using Microsoft Paint, Featured Tutor Sam Rickles has put his talents to work on some of the most popular films of the past few years. Rickles is currently an FX Technical Director for Sony Pictures Animation, and uses most of his skills to "digitally blow things up." We had the opportunity to get to know more about him as well as learn from his experiences and expertise in this Featured Tutor Interview.
Q

Could you start off by telling our readers a little about yourself and in your own words what kind of work you do?

Well first off, thanks for giving me the chance to talk about my experiences in the industry! Just before I started high school I started making short action films for fun. They were pretty thin on story, but I would mostly make them as an excuse to do special effects explosions and gun battles and things like that. And by special effects, I mean frame by frame painting explosions in MS Paint. Thankfully the software I have access to now is a bit more powerful than MS Paint!

I was in film production classes all throughout high school and originally wanted to pursue a career in film editing or directing (like all filmmakers, right?), but when I went to college I joined the Computational Media program at Georgia Tech, which is a joint computer science and liberal arts degree. Through my coursework in college I learned more about computer programming, 3D applications and animation. Eventually, I identified Visual Effects as the career I wanted to pursue.

Due to my programming and film background, upon graduating in 2010, I was offered a job at Sony Pictures Imageworks as a Production Services Technician (PST), where I provided technical support for artist and production personal for various productions at Imageworks. I eventually transitioned to my current position as an FX Technical Director (TD) in 2012 on the animated feature “Hotel Transylvania”.

As an FX TD, I am responsible for creating a wide range of elements, mostly things like natural phenomenon (fire, water, smoke, fog, rain, oceans, explosions) and simulations for events that would be too complex to animate by hand, like item destruction or dynamic objects like rocks and debris flying around or glass shattering. So in a nutshell, I digitally blow things up all day.

What was the toughest part of breaking into the FX industry?

I think the biggest thing to focus on is just getting your foot in the door, no matter where you start. Many of the most successful artist and production personnel started at the ground floor; I know one producer who started as a valet at Sony and worked his way from there!

Once I became a PST I had a lot to learn about the VFX industry and how our facility worked. But as time went on and I became more comfortable in my position, I was able to focus on learning more about other VFX disciplines, particularly FX. I took every internal class our company offered on FX and spent time after work learning more about Houdini (our primary FX software).

I think the important thing to do is make sure you let the right people know your goals and aspirations and at the same time show that you are taking steps to learn more about the position you want. And of course, make sure you are doing a good job in your current position too!

Do you have any tips on creating a demo reel to impress potential employers?

Your demo reel should always showcase your best work and shouldn’t be too long (I think 2 minutes or less is a good length). You should clearly state what you did on each shot in your demo reel so the employer knows what to focus on. I also include a reel breakdown with my demo reel that further details what I worked on, since you can only fit so much into the lower third text on your actual reel.

Which film was your favorite to work on?

From a subject matter stand point, “Edge of Tomorrow” was really fun to work on. So many cool effects in that movie. I even had the opportunity to do some motion capture acting for some of the background soldiers, which was a day of running around a Mo-cap stage in snowboarding boots to capture the awkwardness of wearing an Exo-suit. That was a blast! I also really enjoyed my work on “Cloudy with a Chance of Meatballs 2“. I was one of the first FX TD’s crewed and had the chance to develop a lot of effects from scratch, which is always very challenging yet fulfilling at the same time.
Q

What does it take to become successful in this industry?

I’ve found that my success has come from always being open to learning. Every day I want to learn how to do new things. I am fortunate to work with a lot of really talented artists and I’ve found that I can learn more just by sitting down and watching them work for an hour than I could through any other medium.I’m always trying to improve my knowledge in FX and at the same time I try to always find ways not only to make my work more efficient, but to make my facility more efficient as well. Showing your employer that you are not only growing as individual, but that you are also focused on making your team and the facility stronger I think will pay dividends in the long run.
Q

What’s your next or current project – if you can share of course? 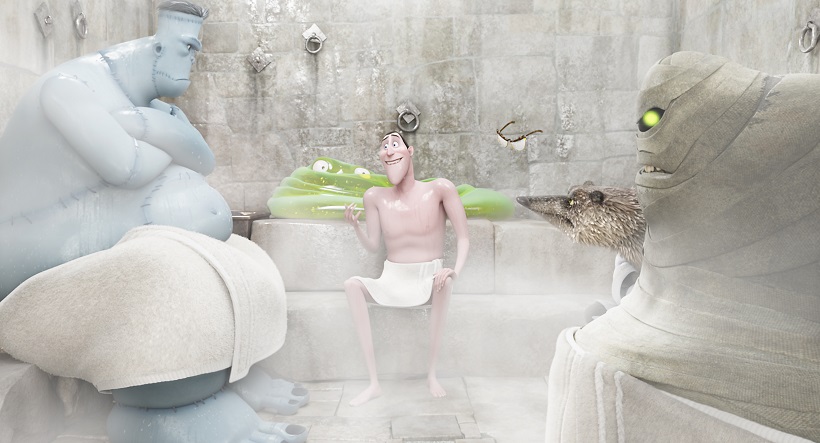 What would be your dream movie to have worked on or would you like to work on?

Hmmm, that’s tough. I’ve been very fortunate to have the opportunity to work on some amazing films thus far. The subject matter of super hero movies and sci-fi movies lends itself to some pretty fun effects, so I always look forward to that. Honestly, as long as I am making movies, I’m happy!

Do you have any final comments or suggestions you would like to leave for our readers?

Never stop learning. There’s so much to learn in this industry and failing to expand your skill-set because you are comfortable in what you are currently doing may catch up to you one day.