Five Tips to Improve Your Photography for 3D Textures

There's a ton of great resources online for free or premium textures that can often eliminate the need for you to take your own photos. While those may work for many projects, you can save yourself a lot of headache by starting to build up your own personal texture library. This can help to ensure that you always have a number of high-quality (and free) images available for you to pull from in your next project. From saving the time of sifting through the countless number of poor quality textures out there to making sure that the textures both fit the look of your project and have enough resolution for what you need, taking your own textures is something that can come in handy for any texture artist. Here are a few things to keep in mind when you grab your camera for snapping texture photos. Picking the Right Camera to Use You don't really need anything special for taking photo textures. Any sort of digital camera is recommended. In this article the photos were taken with a Canon Rebel T3, but you could just as easily take them with a point and shoot camera. Some cell phones may even be able to take good texture photos, but generally speaking it should be avoided if possible. Usually the lenses on cell phone cameras aren't too great, and they're often prone to either poor shutter speeds (which can cause blurry photos) or compressing the photos too much. Another benefit to taking photos with an actual camera instead of a phone is the ability to shoot in raw. This can really help when you need to make minor tweaks like adjusting the white balance or increasing the exposure of a photo without hurting the quality. 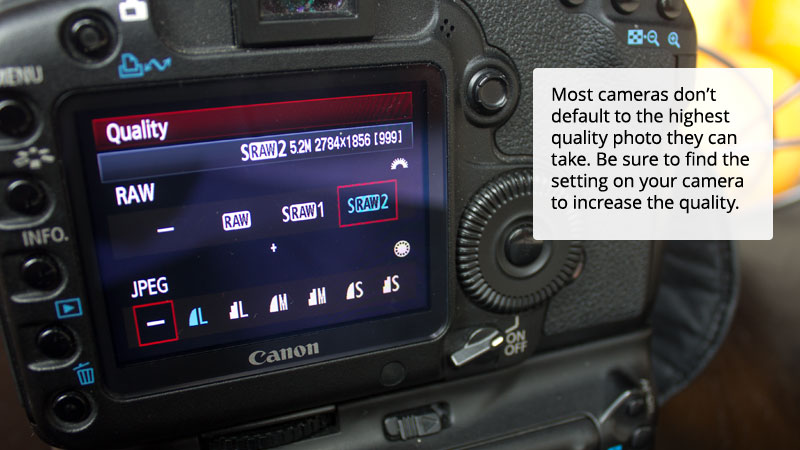 It's always easier to size a photo down than it is to scale it up. Blurry or pixelated textures aren't useful, so it's always a good idea to take your texture photos as large as possible. While this might seem obvious, most cameras don't default to their largest size so you may need to hop into the menu on your camera to adjust this. Avoid Taking Photos at an Angle To be able to successfully project your 2D textures onto a 3D object, you'll want to make sure the photos are taken from an orthographic point of view. Think about the 2D cameras in your 3D scene and those are the views that you'll want to take your texture photos from: Top, bottom, left or right. While this isn't always an easy angle to get, the closer you can come to a straight-on view the better your textures will look once they're applied. Remember you can sometimes stitch together multiple photos to get this orthographic look if it's too difficult to capture it in a single photo. Keep the Lighting Flat In most cases unless you have an indoor studio lighting setup, outdoor lighting is the best lighting for your textures. That's because your texture photos shouldn't have any noticeable lighting. The primary reason for this is because you'll be adding lighting in 3D. If there is existing lighting in the textures that are on your objects that can make things start to look strange if, for example, the texture has a shadow in it going the opposite direction as the shadow that is being cast in 3D space. Of course, it's impossible to take a photo without lighting at all. But try to ensure the lighting is as flat as possible. This means there shouldn't be any visible highlights, shadows or any other elements that would work against the highlights, shadows and lighting you'll be adding in 3D later on. 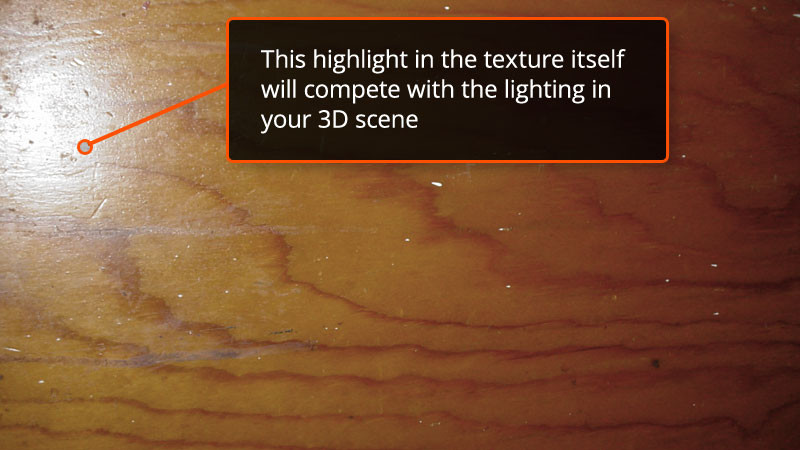 The above photo is a great example of bad lighting in a texture photo. Notice there is a hot spot of light on the left side and also the lighting starts to get dark on the right side in what looks like a vignette effect. These lighting effects that are within the photo itself can make the 3D object in your scene look odd when they compete with whatever the 3D lighting is going to be in the scene. While you could clean something like this up, usually if a texture photo requires a lot of clean-up, it can be faster to just re-snap the photo with better lighting. Stay Away From Auto Flash Generally speaking, the built-in flash on most cameras can destroy the quality of most photos by creating a harsh shadow behind foreground objects in your photos or sharp highlights on reflective objects. This is only amplified when you're taking photos for textures because you don't want to introduce those shadows or highlights in the photos themselves. 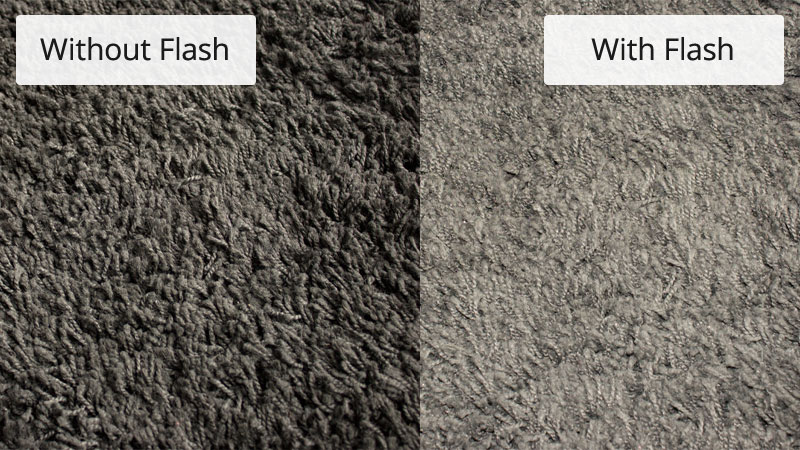 Above you can see two photographs that were taken with the same settings from the same camera of the same texture. The only difference is that the one on the right had the flash turned on and the one on the left was taken without a flash. As you can tell, there's a huge difference between the two photos. Depending on what you're taking a picture of the flash can cause this extreme variance in what the outcome will be. For that reason, it's always a good idea to keep the "auto flash" option on your camera turned off. Make sure the use of a flash is a conscious decision. Don't Over-Edit Your Photos Obviously you don't want to be adding post effects like vignette or grain to your texture photos. Such effects might make for nice-looking photos, but they hurt the usability of texture photos. Despite this, there are tons of image editing techniques that you can do to make a bad photo look good and in many cases these same techniques can be used to fix a bad texture photo and make it something usable. But don't go too far. Remember you can always snap a new, better photo if you need to. Keep Learning Now that you've learned some tips for better texture photography, you can probably spot the slight vignetting that has occurred in the photo on the right side in the screenshot above. Depending on your setup and equipment, keeping an eye out for things like this can be the difference in usable textures or frustration from having to clean-up bad photos before texturing. Once you've taken some photos and started to use them as textures you'll start to find issues that you have to fix and things you wish weren't in the photo. Don't be afraid to take notes on what you're having to work around and keep them with you for the next time you take texture photos. This will help you know what to avoid and when to accept the photos you've taken as acceptable for use as textures. If you have any tips that you've picked up from taking texture photos of your own, let us know in the comments below.