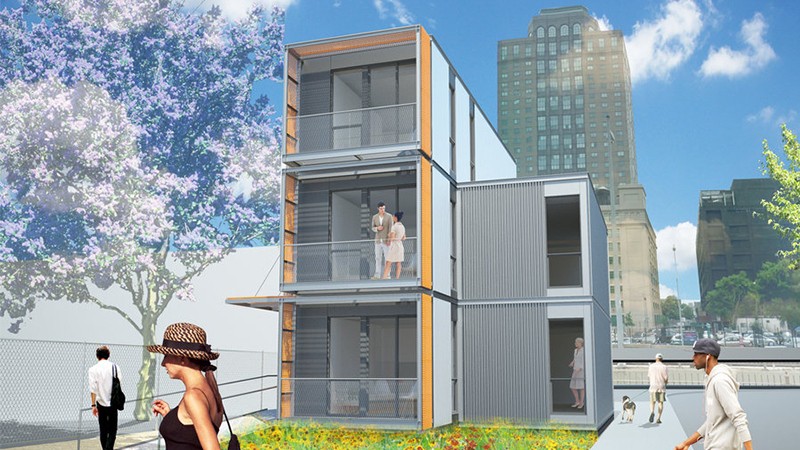 With the beginning of hurricane season quickly approaching, New York City is helping reassure its citizenry of its preparedness by debuting its long-awaited disaster housing prototypes last week. New York City's Office of Emergency Management (OEM) worked with Garrison Architects to design pre-fab housing units for people displaced after large scale man-made or natural disasters like 2012's Hurricane Sandy. The units were installed in Brooklyn and consist of three 12' long x 40' wide container-like housing units designed to be portable, stack-able, and assembled quickly. Each individual unit includes bedrooms, bathroom, kitchen, and storage, and even a balcony. The units can even be locked together to form an urban neighborhood in addition to being outfitted with photovoltaic units to produce their own electricity. According to OEM, the entire prototype installation of three units (with attached stairwell) took a little over 13 hours. You can watch a time lapse video of the on-site assembly below as well as Mark Line Industries manufacturing of each individual unit here. Mathew Hoffman, spokesperson of Garrison, reported that the housing project's plans were created in AutoCAD while Rhino was used for the 3D work. "We utilized renderings heavily to communicate key details, like the exterior stair construction," states Hoffman. From a production standpoint, Mark Line Industries adopted both AutoCAD and Revit to turn Garrison's schematics into production drawings for their modular home assembly line. Mark Line marketing director, John Morrison, stated that Revit will be a "powerful tool" for the pre-fab industry in the future because of its ability to allow designers to see virtual environments and how prefabricated components will "integrate" into existing structures before production begins. Building Information Modeling (BIM's) software like Revit will, according to Morrison, give engineers, designers, and contracts the "confidence" to utilize modular units for larger conventional buildings like hospitals. Where do you think the future of prefabrication is headed? How will BIM's software like Revit change architectural workflows? Let us know what you think by commenting below.