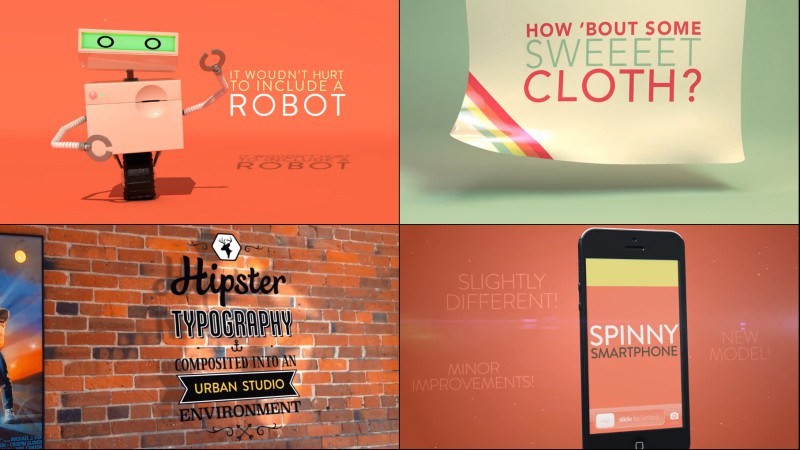 What Does Your Reel Say About You? Interview with Peter Quinn, Creator of "Shit Showreels Say"

You may have spotted a clever video making rounds across the internet recently. The motion graphics piece chronicles many of the tropes found commonly in motion graphics showreels and is tastefully entitled "Shit Showreels Say." If you haven't had the chance to see it before, now's you can:
[vimeo 97482272 w=500 h=281]
We decided to reach out to the creator of "Shit Showreels Say," Peter Quinn, who is the Art Director and (self-proclaimed) "motion graphics shaman" over at Blink Media in Vancouver. We had a lot to ask about exactly what kind of "shit showreels say," as well as how clichés start cropping up over time, turning into staples of the VFX world. Peter had the answers.

What are some tropes/clichés in the vein of “Shit Showreels Say” that you still find some clients actually want to see in projects?

As a motion designer, or any type of designer, you’re continuously solving problems. Chances are, you’ve been asked to represent data being sent for example. Maybe it’s to show internet speed, global connectivity or uploading to the cloud. Typically, the client will have mentioned ‘ones and zeros,’ believing that this is a logical way to represent data. Of course it is, but every time you set up an animation with ones and zeros, a part of you dies. You sigh, export, upload, and the client most likely signs it off. That’s a trope, because it works – nobody gets confused – everybody’s happy… but if you push yourself to avoid those tropes, you might come up with something better, or at least a little bit different. The best thing to consider is how to tell the story. Today I’m animating a 3D laptop and comping-in screenshots of online banking to represent how online banking works. If I were to try and reinvent this – add unnecessary flair or abstraction – I might feel better about myself as a motion designer, but it would hinder the story being told. So, after going around in a circle, you might end up back at ones and zeros. But try anyway.

Now it seems “Shit Showreels Say” has spawned its own Vimeo Channel and is steadily filling with other people’s awesome showreels. What’s your hope for that channel in the future?

It’s just a little way to publicly bookmark some of the nice reels I’m taking in. A way to give shout-outs to guys who’ve produced work that needs to be seen. I’m a big fan of Vimeo and their community. There’s a lot of awesome channels with specific niches you can follow, so I thought I’d throw my hat in the ring. The channel is open to follow, or drop a note in the shout-out box so I can take a look.

"Tropes are tropes because they are functional and easily understood."

When you’re watching showreels, what is one big thing you see as a red flag signifying “don’t hire this person”?

Well, I can’t be too hard on reels or projects that aren’t shiny examples of freshness and originality, because I’m as guilty as the next guy… I’ve got plenty of spinny smartphones and overuse of Plexus in my back-catalogue. Tropes are tropes because they are functional and easily understood.

However, one thing that really grinds my gears is the direct use of tutorials. Sometimes you see almost identical shots or vaguely modified versions of Videocopilot or Greyscale Gorilla tutorials.

I’ve actually received reels that include clips using actual downloaded project files –  barely modified! Un-be-lievable. That smells like plagiarism to me, and at very least, it flies in the face of what it means to be creative:

If you’re learning from tutorials, it’s fundamentally important to take that knowledge, understand what’s going on, and develop a technical backbone of your own. It’s not about being amazing, it’s about trying it for yourself.

Alternatively, what’s something you see in a really great showreel that tells you that an artist really knows his/her stuff?

Hmmm. That’s a good question… I don’t think it’s really one ‘thing’. It’s more about showing personality, communicating ideas well and telling stories with well-executed flair, and trying to do it a little differently than the next guy. Some reels scream style, some whisper finesse but great reels show you that the designer loves what they do, and knows their shit.

What is a personal favorite showreel that you’ve seen?

My favorite reel changes from one day to the next, but it’s usually the “moments” that catch my eye. It could be a camera move, a sweet render style, or one mind-blowing intricate detail that I’ll watch over and over, frame by frame until I understand how they’ve achieved it. Generally, it’s a little idea or a process that makes you raise an eyebrow. Sometimes, it’s just nicely arranged typography or a genius transition that I never would have thought of.

To drop a few names, I’m continually impressed by Buck, and the guys around the corner from us at Giant Ant – even their intern’s video application blew me away.

Digital-Tutors has a great free resource of demo reel tips and portfolio tips, including ways for tailoring a reel for a specific job, that can help any artist perfect their demo reel and put their best foot forward to land that perfect job in the creative industry. And of course, make sure they don’t fall into any of the clichés highlighted in Peter’s video, “Shit Showreels Say.”