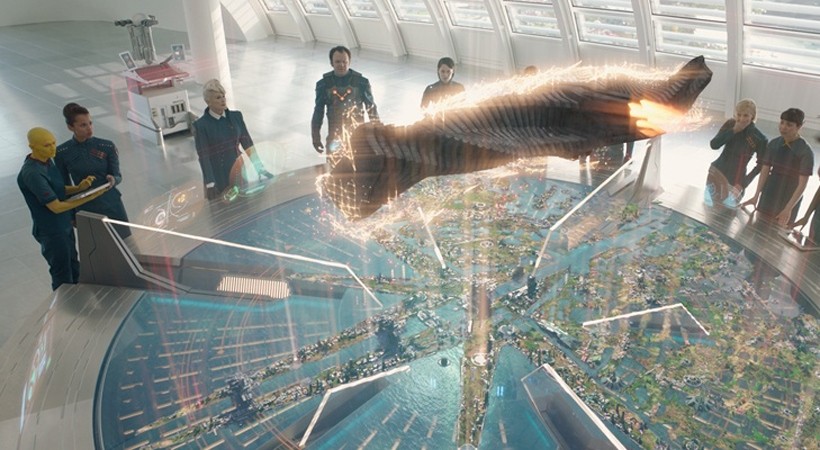 Method Studios' VFX Magic in Guardians of the Galaxy

Marvel Studios' summer smash hit, Guardians of the Galaxy was a favorite among fans who enjoyed the film's unique characters, sci-fi action, and humorous one liners. Even GOG's "Awesome Mix Volume 1" soundtrack went gold selling over 500,000 copies last week. However, also popular among audiences was the impressive visual effects studios like Method were able to achieve. Method's creative execution on the film was supervised by Greg Steele and Stéphane Nazé. The studio's website gives an informative look at how some of their specific VFX shots were created. Some of the scenes involve compositing cosmic landscapes with matte painting techniques while others mixed 2D objects with fluids and particles to render hyper-real holograms.

One particularly interesting shot involved the scene where the Power Stone orb is being opened by robotic hands. Essentially, Method’s artists used a live action plate of actual robotic arms spinning a prop orb. Then they replaced the arms with modeled versions that could be more accurately controlled, spun faster, and finely articulated. You can see in the comparison image above several of the effects that were incorporated into this short scene:  the refinement of the CG robotic arms with a smoother surface texture, the addition of motion blur to the arms’ spin, and the purple lighting that was added both to the Power Stone and the metallic surface of the orb.

Take a look at Method’s breakdown of these individual scenes on their website, which also contains a short VFX reel showing many of the compositing elements and render passes. We can hardly wait for Guardians of the Galaxy 2 coming in 2017.