Even though Destiny has been out for several months there is still a significant amount of buzz around the game as new expansions and updates are released consistently. Creating a game of this magnitude requires hundreds of talented artists and years of production. During NAB 2015 several Bungie artists took the stage to talk about the art and creation of Destiny and some of what was involved with bringing such a massive undertaking to fruition. Destiny is a very ambition project and one that Bungie has a ten year plan for. The artists began first speaking about the ten year plan they have for Destiny and the thinking behind that, and how that will unfold. “When we set out to make this game we knew we were going to consistently grow it as we continued to build it. We started with what we knew, which was a first person shooter and a very fantastic world and we wanted to broaden that. You’re already seeing the expansions now with House of Wolves, and we’re going to expand the story and expand the content and how you play the game. There’s a lot of really cool stuff on the way.” One of the approaches the developers took on Destiny which you may have noticed when playing is that many of the robots had fantasy and mythological names. The artists talked a bit about their thought process behind this. “It started with Barry at the very beginning, he said he wanted to have this mythic science fiction, and bring these two things together. This really led into everything, whether it be art, story, etc. So a lot of the naming choices stemmed from that initial conversation early on in the development.” They also talked a bit about many of the comical weapon names like Bad Juju, Universal Remote, etc., and the thought process behind that. Senior Animator, David Helsby said, “It all starts with an idea. A writer will come up with an idea and it just goes from there. That’s one of the great things about working on Destiny, the talent of the people around you builds on these ideas until they are finally fleshed out into something amazing. From the beginning they were pulling people from the studio and asking if they had any cool name ideas for weapons and armor and people would just submit the craziest stuff. Things like weapon names and area names are often sourced internally because we have so many creative people we just ask anybody for ideas.” 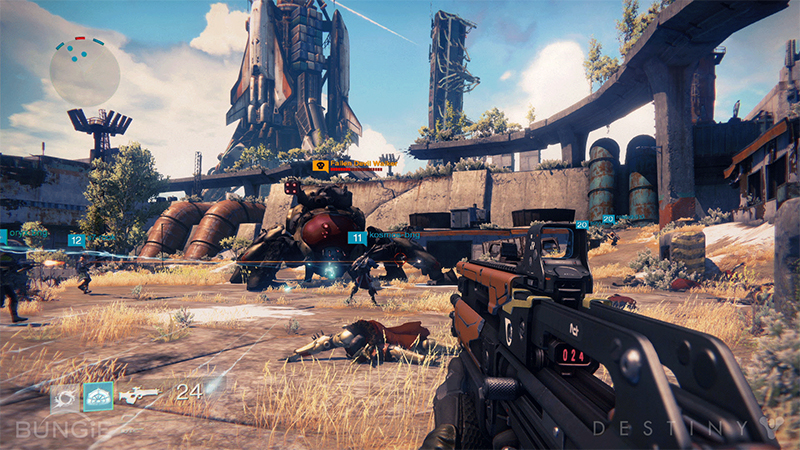 Destiny is not only a first person shooter but it also plays heavily on the MMO and incorporates many aspects from that genre. It’s something new to Bungie after coming off of Halo and developing this new IP. “We weren’t prepared for the MMO crowd to be perfectly honest. It has been a huge learning experience for us. MMO fans and MMO players are a bit more hardcore and more thorough in there preparation and their involvement than your typical first person shooter fans.” David continued “The way that we approached the game and the way that we built the game from first person shooter aspects, we were taken a little bit by surprise by the intensity and the involvement of the MMO crowd.” The team also spoke about Bungie, what it’s like at the studio and their hiring process. “We’re constantly hiring people who are fresh out of school, and that is a really good experience. I’ve been in the industry for almost 23 years and to have guys who are basically brand new is a little threatening but it’s also inspiring and challenging and it keeps me on my toes. If we didn’t do that as a studio a lot more of the seasoned folks might get a little too comfortable.” Bungie is not only very open to hiring brand new artists with little to no industry experience but they also want to ensure their employees are continually learning. “We’re constantly educating the employees. We have figure drawing classes, we have a program that funds people who are in school learning something, even if it is outside their discipline. So, as an environment artist I can go and do some work on concept art, learn figure drawing, or whatever it might be.” Jason Sussman, Senior Environment Artist said. During the talk, the artists discussed what it was like going from Halo, a franchise they have worked on entirely up to this point, and starting a brand new IP. “For Halo we had all this great content built up that we could basically spring board off of for each new title. When we went from Halo to Destiny we had to throw everything out, not one piece of content was really saved.” David Helsby continued, “On the standpoint of animation and gameplay all that stuff had to go, every piece of geometry, and every piece of animation. For my team and me, it was really a monumental thing to tackle. It was really cool in a way just because we got to do something new and expand on our prior knowledge, and be unbridled. But it was also challenging because there was no content to springboard off of.” The team also talked about how freeing the process was. Going from working on Halo for so long, where everybody knows the world so well, all the characters and the story to moving to Destiny where nothing had been created yet. The artists also took some time to address the reviews and scores for Destiny and how they felt about the initial reception of the game which was quite negative during launch. “Once the reviews started coming out, honestly I was a little bit surprised and I think the rest of the guys at Bungie were surprised as well by the lack of depth and understanding in quite a few of the reviews, and it felt like people hadn’t played the game enough to get it I guess. They would compare it to Call of Duty or compare it to World of Warcraft or they just hadn’t played it enough.”