With new technology emerging every day, sometimes the creative intent behind a movie or television show gets lost in the technology. One of the keynote sessions at NAB 2015 this year saw Carolyn Giardina from The Hollywood Reporter moderate a discussion around things to be aware of. Participating in the discussion was David Keighley, Chief Quality Officer and Executive Vice President at IMAX, and Jan Yarbrough, Senior Colorist at Warner Bros. Off the bat, Keighley pointed out that a director’s creativity varies quite a bit, depending on who the director is and the budgets they command. For example, someone like Christopher Nolan or J.J. Abrams are more likely to sway the studios they work with and see their intent make it to the big screen than a director who may not have budgets as big.

Although digital cameras are coming along, according to Keighley, a lot of directors intending to output to IMAX usually want to shoot in film because of the resolution benefits it provides. “[A director] may want to finish in 4K so those wide shots look great,” Keighley said. “His creative intent may be to shoot in 35mm and then scan it at 8K and give a 4K file, but I can tell you the amount of 4K masters we get to put on our screens is minimal. I think this year there will be one.” Another big issue for the resolutions a director may want to shoot in is finding VFX houses who are willing to do 4K or bigger. Or, because there’s so much conversion going on between 2D and 3D for movies these days the costs associated with that on a larger resolution is a big deterrent. “Tell me, what’s the last conversion host to do something in 4K?” Keighley challenged. “It’s never been done. It’s all in 2K.” Of course, technology does a pretty good job of enhancing the 2K footage to display on an IMAX screen, but the budget and time are the primary driver behind these limitations. And resolution isn’t the only technological road block for fulfilling a director’s creative vision on screen. “Now that we’re getting into brighter screens where things will be displayed, where are the standards around how bright that can be?” Yarbrough asked. “We have a brighter contrast and dynamic range going on, and something I see all the time when I’m doing color correction is the bit depth. If you go from 10 to 16, which is the next logical step, you’re creating about 60% more data that you have to handle. That’s a lot of data you’re pushing around at 4K.” As a filmmaker, it’s important to keep up with the technology to see how you can take advantage of it as well as being aware of the limitations that might be involved in using it.

Making sure a director’s creative intent is displayed goes far beyond the creation of the movie itself. It’s also important to make sure the movie is displayed properly in the theater. Although the role of the projectionist at theaters have changed significantly over the years, there is still certainly a human element to making sure movies get displayed as the director intended. “I’m passionate about the projectionists in our business,” Keighley said. “Some people think that certain things don’t matter like ambient light level, but there’s no point in having a great contrast level in the movie if you’re washing it out with the red light from the exit signs in the theater. I think there’s an idea that the popcorn guy can run all of the projectors. When we had 20,000 projectionists I’m sure half of them were just punching the clock, but a lot of them were passionate about it.” Keighley continued, “When a lamp gets changed and you’re jostling the projector around, who is there to make sure the lens hasn’t been bumped? Don’t get me wrong, a lot of cinema operators have that figured out but I think a lot of those people don’t exist anymore, and we’ve lost something because if the white point, the color temperature and the brightness is off then the whole experience can be ruined. Yes, we don’t have scratches anymore with digital but I think we could do a lot better to make sure the director’s creative intent is carried through to the end.” Of course, none of this extra care happens for free and not every theater wants to add the extra cost for what many would consider to be minor adjustments. 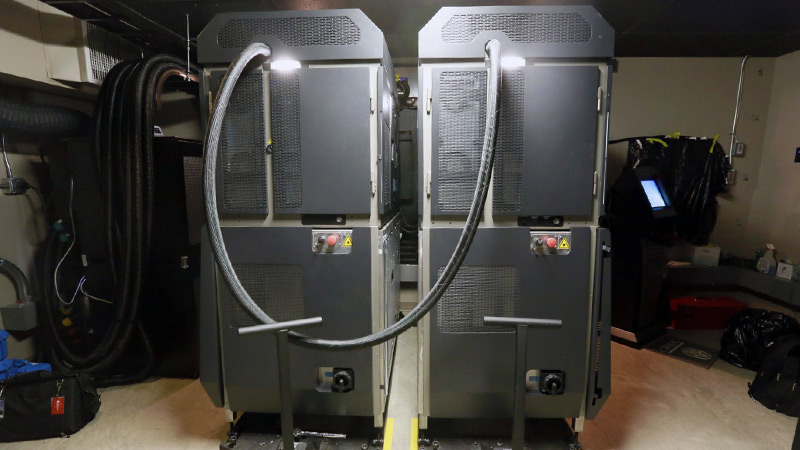 IMAX's new laser projectors at The Chinese Theatre in L.A.[/caption]   Currently only being used in a very few locations, a great example of an upcoming technology is IMAX's new line of laser projectors. With technology like this, directors and filmmakers now have the ability to take advantage of a whole new range of colors. Although it'll probably be a long time before this technology is mainstream, it's still important to stay on top of the trends. Keighley explained the results of their first test, “We just finished up the world premiere of Furious 7 and the best comment that came out of that was the director, James Wan, who said it was ‘Fantastic, and how did they get those blacks?’ So that was really cool.” “We were able to make the laser master from the regular DCDM (Digital Cinema Distribution Master) data,” Keighley continued. “And I’m not going to say it was perfect, I think we’re all learning. But everybody that was there was very happy with it. It had good brightness and good blacks and at a screen size of 90 feet, I couldn’t be happier.” The next test of IMAX’s new technology is with Marvel’s Avengers: Age of Ultron, which releases in just a few weeks. Keighley and the team at IMAX is already working closely with the creative team behind Age of Ultron, including Bruce Markoe and Steve Scott, to get it approved for display on their projectors. “We’re also going to premiere our new sound system with that movie also,” Keighley stated. “So we’re pretty excited about that.”   Overall, the key takeaways from this session was in how many details can affect the overall experience in movie going. Although most people probably don’t think about many of these details, like how the exit signs in a theater can have a negative effect on the colors on screen, they still can detract from the creative intent of the movie. Because of that, they’re things you’ll need to keep in mind and watch out for when you’re creating something for the big screen.