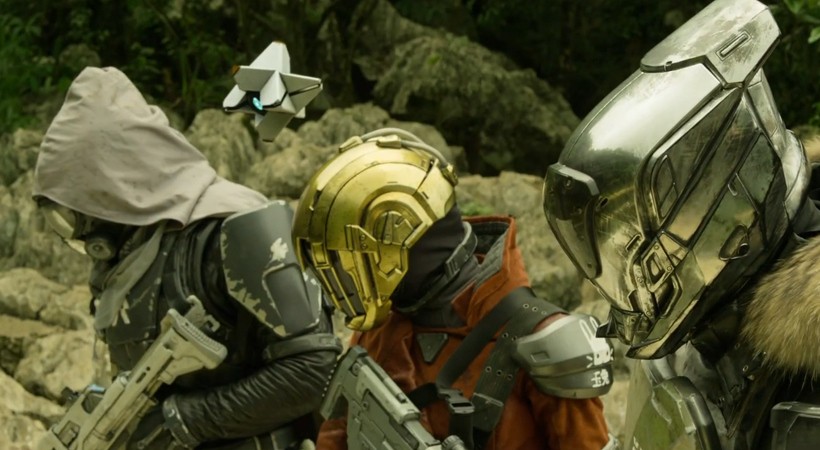 A new Destiny live action trailer "Become Legend" was unveiled today with only four days left until the game's highly anticipated release on September 9th. As with any game trailer, "Become Legend" showcases several of the game's weapons, vehicles and settings. The trailer's short story line follows a trio of Guardians who scour the solar system destroying alien hordes on the Moon, Venus and Mars. The traditional weapons they wield include rocket launchers, rifles, pistols, and shotguns, which seem standard fare for such battles. More interesting from a gaming point of view are the "magical" types of weapons like the powerful blue orbs that can be formed within your hand and then released towards opponents or else thrust towards the ground, creating what appears to be a small nuclear blast. The trailer may reveal some of the more playable features of the game, but what seems most surprising is its humorous take on what has otherwise been a more profoundly-toned and more seriously minded marketing strategy. Unlike the game's E3 release trailer, "Become Legend" is heavy on a humor that seems to be riding the popularity of Guardians of the Galaxy with its own quirky asides and lampooning of superhero types. The trailer's one-liner: "I can say 'Hello' in any language" is a good example of this satirical approach to action films and games that take themselves too seriously. The "Venus" scene where the characters seem a little overly-enthusiastic about their travels to the Goddess's planet resembles a beer commercial more than a video game trailer. You can almost here Budweiser's classic "Wassup!" ad campaign within the scene's editing rhythm and content. Overall, the trailer seems to be significantly lightening the mood of Destiny prior to its release date. It's a strategy whose intentions may be to remove a bit of the game's over hype, and one that will probably, ironically, end up creating more.