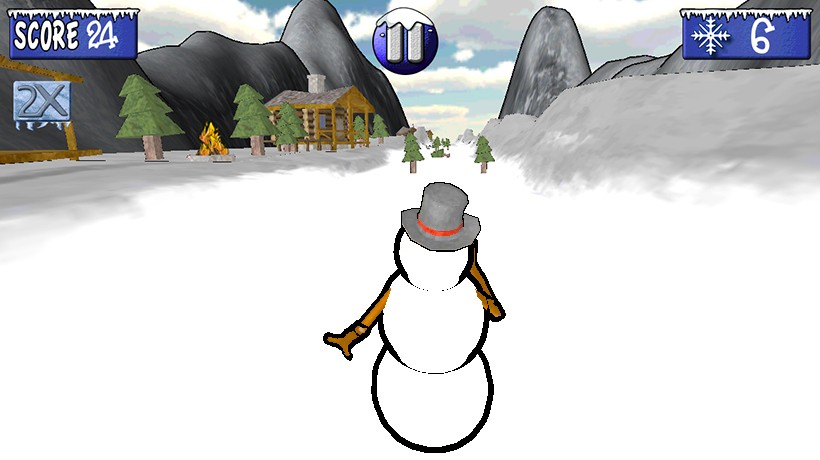 At last week's meeting of the Oklahoma Game Developers hosted by Digital-Tutors, some time was set aside at the end of the tutorials to give members the opportunity to present their personal projects and to discuss their development pipeline. One of these members was newcomer, Mike Kolb, who's begun designing an infinite runner called Run Frosty Run. The game is loosely modeled after similar runners like the apps Temple Run and Jetpack Joyride, and Mike hopes to market the game as a downloadable app in the near future. We thought it would be beneficial to other devs who are just starting out if we got some insights from Mike about what it takes to develop this type of game from concept to finished product, what coding problems he encountered, and what solutions he came up with. 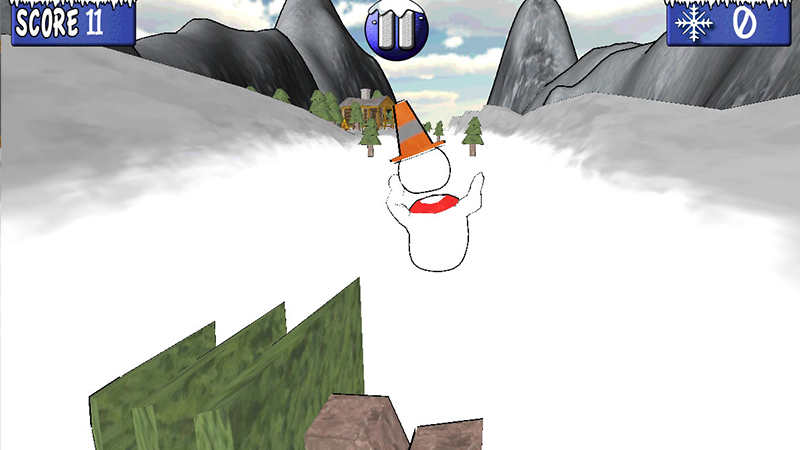 For infinite runners the basic goal is simple: don't run into or off of something. For "Run Frosty Run," the main obstacles are trees and treacherous drop offs that either turn your sweet little snow-person into a cloud of snow dust or send it plummeting into a dark, icy abyss. The game's controls are just as simplistic with a left and right tap for movement and a bottom tap for jumping. As far as characters go, there are five unlockable snow-people that include such memorable names as: Billy Snow, Ben Frosty, and Veronica Hail among others. The player's score is based on how long he or she survives the escape from summer. To help, there are power ups such as a 2x score multiplier and a shield that protects the characters. Players can also collect snowflakes to unlock different snow characters and many of the game's hats, which are broken into individual tiers. The first four tiers are unlocked via snowflakes while the final tier special hats are accessible only after completing challenges.

Mike explained that the Frosty project began with some brainstorming sessions. Early on, he began prototyping the basic ground generation that would be the track for his characters to traverse. After nailing down the game type, Mike began work on character and story concepts: Eventually, he decided on doing something with a "cartoony cell-shaded style" and with the Oklahoma summer coming into full swing, he ended up "making Frosty try and escape summer by running into the mountains." In addition, he knew he wanted unlockable characters, "each with their own flair, he states, "with completely different animations so they felt unique and not re-skinned clones."

To increase the uniqueness of their snow characters, Mike outfitted them with accessories. "There would be no Frosty without his hat," he states. This would  help give each character a "unique and humorous look to the game."  However, this type of approach comes with a price, which is the tediousness of create so many different accessories.   "If I never model another hat again, I would not be upset in the least bit," Mike states.

As any indie game dev will tell you, after the overall idea is fully conceptualized, the real work then begins. Mike agrees, stating, "After that, it was all about putting in the leg work, catching and then squashing all the bugs, then fixing the bugs that the previous fix created. Making my user interface look smooth and attractive and most importantly making sure the gameplay, even though it was simple, remained fun." One of the biggest challenges Mike faced was with ground generation timing for his infinite runner. "The ground piece spawning was a huge challenge," Mike states, "Basically, the ground prefabs have two extra boxes hooked to them. The first, located at the front, checks to see if it's hit a Collider called Destroy. Once it does, it spawns a random ground prefab at the second box, which is exactly the distance of three ground prefabs back. This worked to a point, but once the ground reached a certain speed everything would fall apart. Pieces would launch in random directions at insane speeds, and poor Frosty would fall to his death." You can see a brief demonstration of some of Mike's ground generation work in the video below. "I eventually found out it was an issue with colliders and movement vs. spawn speed. The spawn would happen later and later eventually causing colliders to over lap and inevitably destroy it.  So I had to remove the ground colliders and create a ray cast system to check for the ground piece in front of it and move it back exactly one space. Simple enough fix, but without my ground colliders my snowman's rigid body couldn't use gravity to check for being grounded anymore. This led to me having to write my own bit of gravity code and coming up with a new way for the player to jump." For their indie pipeline, Mike is using Maya for modeling and animations, Photoshop to create textures, and Unity 3d to pull it all together. All of these skills and techniques, he states, "I learned how to use through Digital-Tutors." (Check out our Indie Game Pipeline Series) Hopefully, some of Mike's successes and failures with developing a game can help other beginning dev's avoid some of these same issues. At the least, Mike shows that in addition to learning new skills, game development takes learning from one's mistakes and having the dedication and patience to see a project through. We wish Mike the best of luck with finishing up his project. You can follow his progress by visiting his website at Winter Stories Studios. Let us know if you've had similar challenges and solutions as Mike developing your own games by commenting below.