Last night's announcements for the 87th Academy Awards saw Alejandro G. Iñárritu's philosophically dense Birdman and Wes Anderson's farcical Grand Budapest Hotel both leading the pack with nine nominations each. Aside from both films' dark humor, complex narratives, and notable performances, they also shipped some impressive art design and visual effects that really seemed to serve their story lines and themes. For GBH, it was Anderson's familiarly over-saturated hues and intentionally hokey effects (ex. the sledding scene). And for Iñárritu, it was Birdman's Michael Bay-inspired-destruction porn sequences that helped communicate the theme of artistic hedonism within popular culture. (Full list of Oscar nominees after article). The VFX and visual design of these films are used a little differently than we're used to in the industry. VFX is usually tries to make something conspicuous or inconspicuous. Often, they consist of expertly and meticulously animated superheros who crush the very cities they intend to save in some spectacular digital pyrotechnic displays. Other times, VFX functions on a much more subtle level. Modern cities can replaced  with digital compositing that transforms them into planetary worlds, lands of fantasy, or simply erasing them from the background. [caption id="attachment_38083" align="alignnone" width="800"] 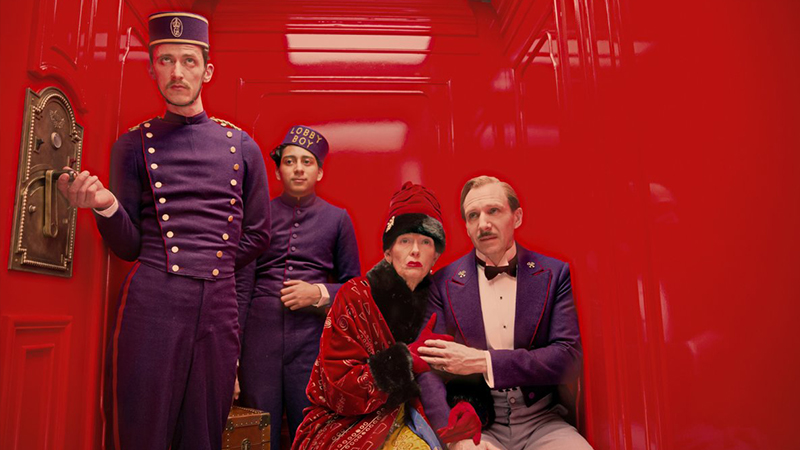 From Grand Budapest Hotel[/caption] Both Birdman and GBH, however, use their VFX work less as a vehicle of realism or to instill a sense of awe. Instead, films like GBH can use VFX to help support its quirky, offbeat mood. Anderson's modeled ski lifts and snow capped mountains have an antiquated, yet charming stop motion quality to them. His sumptuous hues and clashings of red and blues are so prominent and sustained, they're almost characters within the film. Grand Budapest Hotel's VFX work feels as equally outlandish as it does subdued and refined, much like the film's story and characters. Most importantly, the film makers use their VFX to bring something new, more subtle to audiences foundered on Middle-Earth mega battles and dueling cadres of super mutants. [caption id="attachment_38080" align="alignnone" width="800"]

From Birdman[/caption] Fittingly, this overly stated nature of most digital artistry is something Birdman the film satirizes. Michael Keaton's character, Riggan, is a washed up West Cost action film star who dreams of making real art on the stages of New York's theater district. His delusion of a second act for his career leads him on a journey to reincarnate his Birdman persona from the ashes. At one point in the film, there's a rather impressive display of modern VFX forms within the streets of NYC. Jets crash into buildings, which explode into fire balls as debris rains down on the city streets. Giant crow-like monsters howl into the camera. All of this, of course, is in Riggan's head just like his dream of a newly-born Hollywood career. Birdman seems to be comment on, among other things, our obsession (over dependence) with VFX in general: digital FX for the sake of digital FX. For Riggan, visual effects are really "side effects" of his delusions of grandeur, his pretenses to being an artist, to producing authentic art. Iñárritu seems to be commenting on Hollywood's over-reliance on visual effects to draw audiences into theaters. Despite neither film being nominated in the Visual Effects category, both Birdman and Grand Budapest Hotel nevertheless prove that VFX can be what you might call "obviously subtle," which is more of an artistic balance rather than a contradiction, I think.

The Academy Awards -hosted by Neil Patrick Harris – will take place on the evening of Sunday, February 22. Below is a list of all the Oscar nominees:

Captain America: The Winter Soldier
Dawn Of The Planet Of The Apes
Guardians Of The Galaxy
Interstellar
X:Men: Days Of Future Past

The Grand Budapest Hotel
The Imitation Game
Interstellar
Into The Woods
Mr. Turner