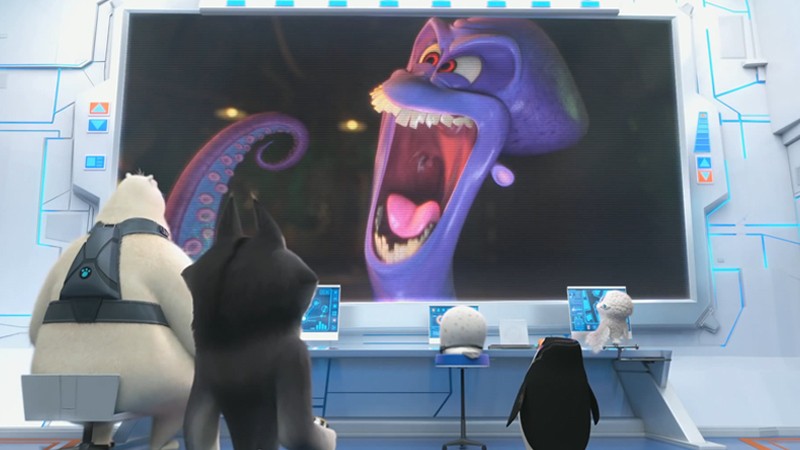 DreamWorks Studios has released a new trailer and short clip from its November 26th animated feature, Penguins of Madagascar. As a spinoff of the TV series, the film's story continues the adventures of those small, flippered secret agents from the Antarctic: Skipper (Tom McGrath), Rico (John DiMaggio), Kowalski (Chris Miller), and Private (Christopher Knights). The trailer highlights a trademark DreamWorks animation style complete with highly kinetic and caffeinated character movements combined with hug-able,squishy body types. Settings are well rendered with spectral and reflective lighting that highlights fluids. Effective lighting techniques also help extend the 3-deminisionality of the Penguins' slick, black and white bodies. However, some character textures, like the Alaskan Husky, "Classified" (Benedict Cumberbatch) seem to be created with late 90's rendering technologies and just a bit out of place. However, the animators were able to achieve a great deal of facial expression given the restrictions of the penguin's football-shaped body type. Overall, the quality of the film seems to take a backseat to the story's attempts at parodying technology and creating humorous moments. Take a look at the trailer and clip and let us know what you think about the film's animation and rendering quality by commenting below.