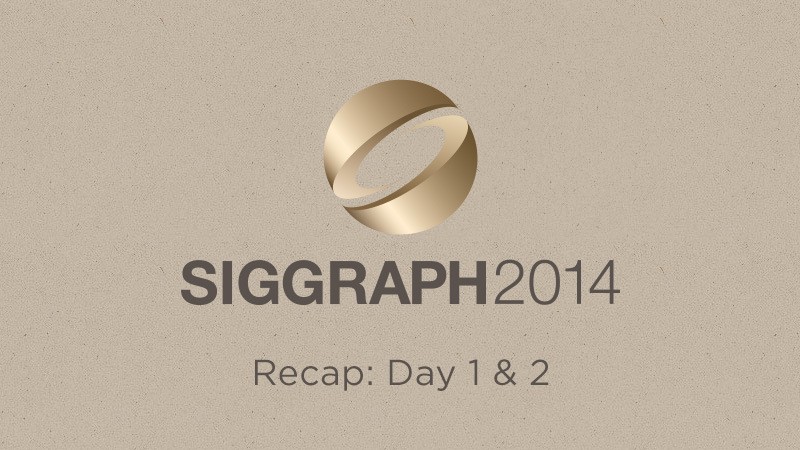 Below is a recap of some of the SIGGRAPH 2014 sessions Digital-Tutors covered Sunday (8/10/2014). These sessions included a "Capture and Display," "Got Crowds?" and "Capture in Depth". Each section has links to the full articles as well.

Yesterday at SIGGRAPH 2014, Alex Kim and Daniel Ferreira from Industrial Light and Magic presented how their unique approach to fractal rendering has made it a much more practical process for VFX work. They used their work on the film Lucy as an example. Fractals are those repeating patterns we see in nature, rivers, DNA, etc. that are identical no matter their size. You can think of them like trees, which begin with a trunk, break into limbs, which then break into branches, which then break into twigs, and so on. If you zoomed in on the tree from a distance, as you got increasingly closer, you would encounter the same basic shapes. This is the type of rendering that ILM used to produce many of the space travel scenes for the film. Read the full article... At SIGGRAPH 2014's "Capture and Display" Session yesterday, Andrew Jones, a representative for the USC Institute for Creative Technologies showcased "Premo," DreamWorks' in-house animation software.One of the hallmarks of Premo's success has been, according to Jones, the software's more intuitive interface with models. Jone's discussion was entitled "Premo: A Natural-Interaction Animation Platform," and stressed the importance of this more "natural" process. "It's been liberating to allow our animators to just hop around and pose what they see," states Jones. In Premo animators and artists spend less time in the curve view. This is because they can directly manipulate multiple characters on screen without rendering, previewing, and waiting. Animation adjustments don't require movement, wait, adjustment, and wait some more. Instead, Premo makes the process resemble traditional animation. More accurately, it's probably more akin to claymation. You also have the ability to pose, push, pull, and sculpt characters by drawing directly on the screen. Premo also gives you full access to any available shots in an entire sequence. You simply load the render and all of the assets are loaded to start working on the shot. Read the full article...

A SIGGRAPH session today entitled “Got Crowds?” had its own as 3D artists and animators discussed a variety of topics on generating crowd dynamics. The presentations ranged from a famous fight sequence in 47 Ronin to new innovations in CG crowd control showcased in Edge of Tomorrow.

Framestore’s own FX director, Andy Hayes, discussed the Tengu Monk fight sequence in the film 47 Ronin, which was one of the most visually complex sequences within the film. The sequence attempts to portray a battle in which Tengu Monks move so quickly that they leave a cloud-like trail of time. The sequence’s conception was inspired by Italian painter Umberto Boccioni whose style (a dynamism of form and deconstruction of solid masses) help inspire the artistic vision of the monks’ movements. Initially, Hayes and company took several photos of an actual monk jumping and blended them together. Out of this came a concept painting that rendered the artistic look the team was going for.

John Hood of Sony Picutures introduced the company’s in-house Crowd Asset Manager (CrAM). The software was used by Sony for the first time in Hotel Transylvania. The software’s developers wanted animators to be able to design and re-use animations with minimal effort. CrAM requires no custom rigs nor is  its AI limited to any terrain. It is an in-Maya tool built by Sony and contains a “Sketch Plane Tool” that is similar to Maya’s paint geometry tool, allowing you to draw curves, spawn characters, and randomize rotation and timing offsets. Read full article…

Advancements in Kinect Based Motion Capture: presenters from USC Institute for Creative Technologies, Miximo, Inc. And Vancouver Institute of Media Arts gave in-depth presentations for new technologies in motion capture that will reduce the cost and ultimately speed up the process for game developers. Through the use of in-home motion capture hardware like Microsoft’s Kinect they’re able to create 3D models that are automatically rigged and skinned as well as use the Kinect for markerless facial motion capture for high quality facial animation for video game productions. Read the full article…