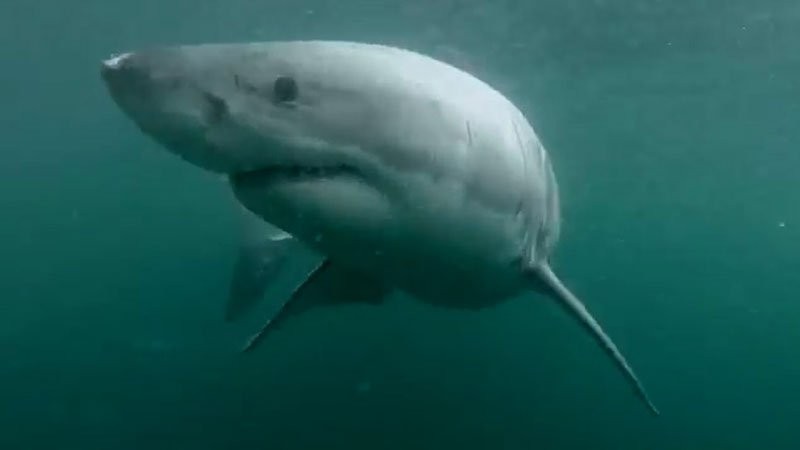 Sydney Shark Encounter: Is It Real or Fake?

If you're like me, by now you're probably one of the millions of people who have seen the footage of the Sydney shark encounter that's gone viral. What struck us as interesting is how many people in the comments, both on the YouTube page and on the various sites that have popped up to discuss the video, have jumped to the conclusion that this video is CG. That sort of reminds me of when the movie Gladiator was released. I had a lot of friends who thought the CG tiger looked really fake. Except, in the scene with Russell Crowe and the tiger, the tiger was one of the only things that was actually real. Sometimes knowing what's real and fake isn't as easy as it seems. VFX artists these days are that good. For this particular clip, there's nothing glaring that stands out as something that proves it's fake. It's obviously not a cartoon CG shark like the one in the image above; that would be too obvious. As a result, the only one who will know for sure and without a shadow of a doubt is the original author of the clip. But in this post I'll take a couple of minutes to look at this clip from the perspective of a CG artist, whether or not I think it's real and why I think that. Before I go any further, watch the video: When I saw this for the first time, I had the same reaction that you probably did: "I'm glad that's not me!" Then after I started reading all of the comments about how it's obviously faked, I wanted to have some fun with it and look at it from the perspective of someone with CG knowledge. First, let's get this out of the way: I don't think it's VFX. If it is a 3D shark, the model is great. The textures are great. The animation and movement of the shark is incredibly realistic. The integration into incredibly shaky footage would be insanely time-consuming and were really well done. Simply put, if this is 3D and you're the artist(s) who did this, then this link is for you. So if it's not VFX and there's still a chance of it being fake, then it must be a compilation of multiple video clips edited together. As you can tell from watching the video the highest quality you can get is only 480p. The way YouTube works is that it'll automatically build out the different video bitrates for you, with the highest quality being whatever they can build out of the original source footage. It's pretty safe to assume that the original source footage that was uploaded to YouTube is around 480p, or somewhere around 640x480. We know the footage was shot with a GoPro, but we don't know what model. The original GoPro shoots at only 512x384. So it's possible that this was shot from an original GoPro and that could explain why the footage is small. It could also explain why the video is really blurry with plenty of digital compression artifacts if YouTube was trying to upscale that 512x384 video into something that's 640x480 for playback. That's a couple of the possible scenarios. But, seeing as it's been about four years since GoPro cameras have been able to shoot well above anything that would garner only a 480p resolution on YouTube, it's not unreasonable to assume that the source footage would be higher than 480p.  If that's the case, it'd mean the video needs to be edited to get it down to something smaller -- so that YouTube assumes its highest resolution is only 480p. That's just the technical side. Let's look at the video itself. In my opinion, the biggest evidence that would suggest this could be faked surfaces when you do a close examination of each frame. In particular, there's one area that's suspect of potential editing. That is on frames 1479 and 1480.  On frame 1479, you can see the shape of the shark on the left side of the camera. Then on the next frame, the shape of the shark all of a sudden is much smaller. Here's a frame grab of 1479 and 1480 side-by-side so you can compare:

For full disclosure, yes I went ahead and chopped off the right side of the video just for the frame grabs above and below. Since the shark first appears on the left side of the frame, that's what you'd focus on anyway. What's odd about this is that if the shark is coming closer, as the frame count gets higher it should be getting bigger. So why would it first come into view from the murky water at a certain frame and then on the next frame appear to be farther back? Here's the shark highlighted so it's a little easier to see:

Yes, it's really low resolution. Yes, it's really compressed. Yes, there is a lot of movement and shakiness that can help make any edits be covered up a lot easier. Keep in mind, though, that even though there are great programs out that can make matchmoving easier these days than it's been in the past, matchmoving is still a lot of work. And matchmoving is just the start. If it is multiple clips edited together, there'd have to be plenty of color correction and other compositing work done. So in conclusion, I can't say for certain if this footage is faked. There is certainly an oddity there with the shark seeming to pop back between those two frames above, but even with that there would be a lot of work required to fake this. Because of the amount of work that would be required to fake this, I would like to say this isn't fake. That is mostly based on my hope that there isn't someone out there with the skills to fake this off who has enough time on their hands to be spending their time hoaxing footage like this. Then again, there are people who have done a lot more work to get their fifteen minutes of fame. Regardless, if it is a fake as many claim, it is a job well done. What do you think? Do you think it's real? Fake? Whether you think it's real or fake, I'd love to hear what your thoughts are, from a technical and CG artist's point of view, on what you think of this footage.