If you're at all familiar with the movie and video game 3D pipelines, you know they're similar. They both utilize modeling, texturing, rigging, animation, etc. However, they're actually quite different in the amount of limitations between the two, texturing in particular. Let's take a closer look at texturing, how it is utilized within the video game pipeline, and what are some very important things to consider when texturing for game assets. So how does texturing vary from movies to video games? Well, you need to keep in mind that video games have a very strict polygon budget to be considered throughout the entire modeling process. Movies, on the other hand, do not. The only limitations modelers are given is that they must get the model completed on budget and on schedule. Of course as software advances, so do the amount of polygons that can be incorporated into a game engine at one time. You can very easily see the significant difference of the graphical capabilities from the original PlayStation to the PlayStation 4. But even still, artists must find ways to keep the quality high, while still staying within the polygon budget allotted. The best way to keep the quality high, while staying withing your budget, is with textures. Texturing for games usually requires a much higher level of detail because, where there is low resolution geometry, the textures must be able to hide it. This helps give the illusion that the model is much more detailed than it actually is. Texturing for games often requires some trickery on the artist's side. Being able to simulate a high level of detail where there isn't any is not an easy task. If the textures are done right, you shouldn't really notice low resolution geometry when playing a game. But if you take the time, and really get up close to an asset, you might start to see just how much texturing plays a part. Use Transparency Maps An alpha, or transparency map, is one of the best ways to create the illusion of detail, and is a widely used texturing technique in video games. If you needed to model a fence, you might go in and model each individual link, then copy and paste it how ever many times is needed. This might be a good technique to do for film, where everything is pre-rendered. For games, however, this would mean a huge amount of extra polygons that could be used elsewhere. Instead of modeling each individual link, you could place a simple polygon plane in-between the fence posts and apply a transparency map. Now it gives an illusion of a chain link fence, without any extra geometry. You can really start to notice when transparency maps are used in games when you get up close to a bush or tree and see that each leaf or stick is actually a flat object. Blizzard showed some of their texturing trickery with what they call 2.5D in this Diablo 3 conference. Use Normal Maps to Simulate Detail Another texturing technique that's used often in games is normal maps. Detail can be simulated in a very believable way by modeling a high resolution mesh and baking all the detail to a normal map. The new map can be applied to the same model, but at a much lower resolution. It will look as if all the detail is modeled onto the mesh, when in reality it's faked. Normal maps work by using normal or height map information to create the illusion that surfaces have varying heights. So for instance, normal maps use RGB values to signify the orientation of the surface normals. 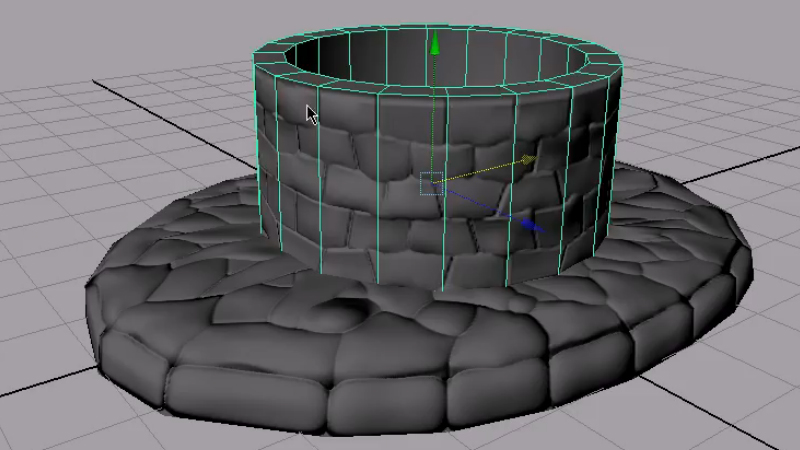 Tiling Textures When texturing for games, there'll often be large areas needing a texture applied to it, like a long brick wall or a wood floor. If you were to create a texture for the entire brick wall, it would be a very long process. Instead, you can tile the texture so only one small texture needs to be used for the entire area. Tiled materials allow you to use a single detailed texture, and apply it to a large surface in the game. The texture is repeated along the entire object, without obvious seams where one instance ends and the next begins. This can be a big time saver when needing to texture huge areas in a short amount of time. Decals Decals are another method used to break up areas on a texture that may be repeated in a game or to add an extra effect. If there's a large rock wall, the same texture may be used for all of the rocks, making everything look similar. To break up the textures, you could go in and place moss and ivy decals . A decal can be placed onto any surface, but is most often created in the actual game engine. It might be graffiti on a wall, a puddle on a pathway or any other variation. These are just simple 2D images that add detail without extra geometry. You can see a decal used by playing your favorite first-person shooter. Shoot a wall. The bullet hole that appears is a decal placed on the texture of the wall. It's basically the same idea as those fake bullet holes you sometimes see on the side of cars. The same goes with blood splatters. These decals can be placed dynamically based on the actions you take in the game.

Using a combination of these different texturing techniques will ensure your game assets look great, while staying within the polygon budget. It can be a big challenge to create texture maps for low resolution geometry, because less polygon detail translates to more detail a texture artist must come up with. To learn more about texturing game assets check out Texturing Low Polygon Game Characters in Photoshop, Texturing Low Polygon Weapons in Photoshop and explore more game art tutorials.