Whether or not you're a fan of the HBO hit True Detective, you've got to admit that the opening credits for this show are downright, breathtakingly cool. While the actual process for creating the credits was a lot more complex than the …

Whether or not you're a fan of the HBO hit True Detective, you've got to admit that the opening credits for this show are downright, breathtakingly cool. While the actual process for creating the credits was a lot more complex than the simple track matte process in After Effects, we couldn't help but be inspired to create a few simplified After Effects comps. We used an easy method to give you some ideas for making your own seriously awesome motion graphics in the course Creating and Using Track Mattes in After Effects. If you're interested in learning the details of the collaboration between Elastic, Antibody, and Breeder, and how they went about creating this beautiful work, check out the True Detective article up at Art of the Title.

Luma mattes are one way to achieve a similar look to the VFX of the True Detective opener. These three examples have heavy use of luma mattes as well as other effects. True Detective is ©2014 Home Box Office, Inc.

In the course about track mattes and blending modes, it was important that you get a firsthand look at how the track matte process works, as well as how to make something really fun and current. 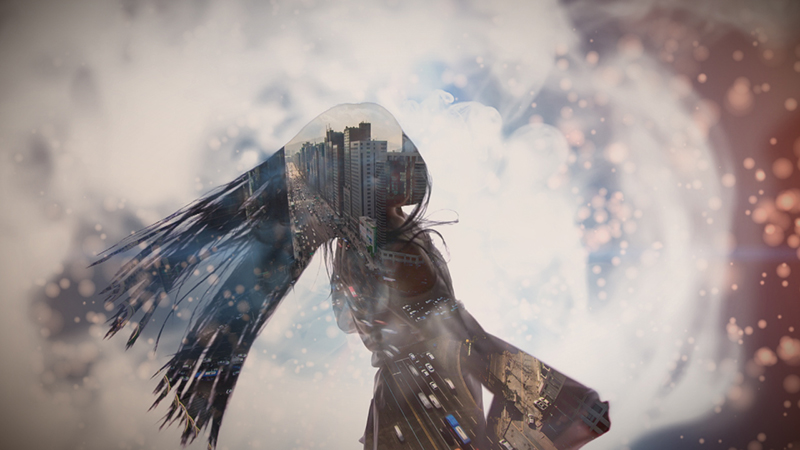 Often times when you’re creating an image and using the track matte process, you’ll be using a luma matte. The luma matte option uses the luminance values in an image (the black and the white) to create the matte. In one of the projects, this ink texture was used which has been stripped down to black and white to create a reveal using the luma matte method.

The hardest part about the track matte workflow is that the layer you’re using for its luminance is not the layer for which the settings change. The settings change for the layer beneath it. As you can see in this example, the stacking order starts with the luminance layer and below that is the layer that you want to be cut away with those luminance values. Below that, there can be more layers that have background information.

Tips and Tricks for Track Matting

There are also some major tips that will help you when you’re working with track mattes on your own. First, remember that Levels are your best friend when creating a Luma Matte. You can use this effect to increase the contrast in your footage and push the mid-tones to make up their mind! When you have too many mid-tone values your image will have partial transparency which is good in moderation but you want more contrast overall.

Yet another trick is to animate a track matte layer to move along with the layer that it’s matting. If you’ve already animated the matte layer try parenting the matted layer to it and check out the results. If you’re using footage as a matte this will not always work.

One of the things they did in the True Detective titles was to project the footage onto 3D geometry that mimicked the shape of the matte layer. This is a time consuming process, but the results as you can see are awesome and the movement you get from adding in that extra detail brings so much more depth to a composition than just using a basic track matte.

This example shows the double exposure look you can get from using luma matting to create a union between two images. True Detective is ©2014 Home Box Office, Inc.

Whether you’re just getting started with track mattes or you’re a seasoned pro, you can be sure that it’s a process that’s not going away. Especially after seeing some of the amazing results in the True Detective spot, we can’t get enough of this fresh take on an old trick. Be sure to implement these tips into your next project to see the added benefits it has on your track mattes!

Do you have any tips for your track matte process? Leave them in the comments below!