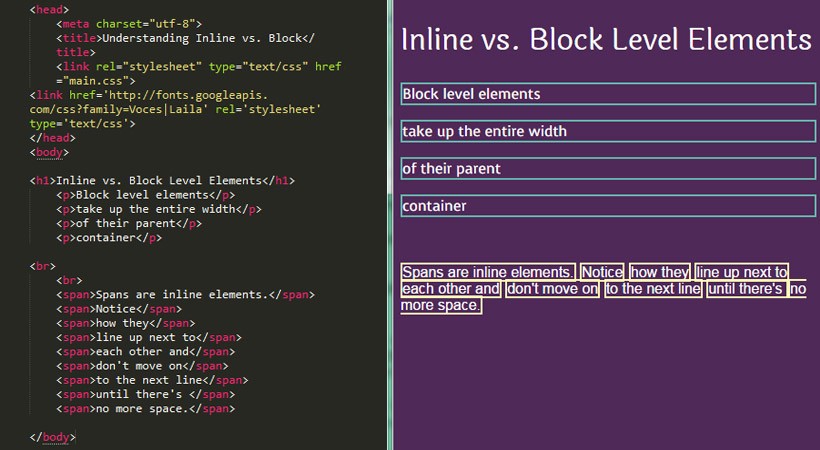 What Are Inline and Block Elements in HTML and CSS?

In HTML, block and inline elements are the building blocks of web pages with each having a default display value.

A block element only appears within a <body> element and uses <div> as an HTML tag to define a section.They begin on new lines, take up the full width of the page, and may contain inline elements or sometimes other block level elements.

An inline element is a presentational characteristic that uses <span> as an HTML tag to define a section. They do not start on a new line, only occupy the space bounded by the tags defining the element, and may only contain other inline elements.

Why Do I Need to Know the Difference Between Block and Inline Elements?

Knowing the difference between inline vs. block elements will help you immensely with your CSS and styling. Because they each behave in a particular way, it will be easier to get them to do what you want them to do with your CSS if you have a solid understanding of the two.

What Is the Difference Between Inline and Block Elements?

Inline elements don’t start on new lines, meaning they line up right next to each other on the same line if there’s enough room for them because they can’t take top/bottom margins or width/height properties. But, they can still be styled with left/right margins as well as with padding.

Some common inline elements are:

The image below showcases the behavior of inline elements. All the spans have a yellow border applied so you can see the width of the elements.

By default, a block level element takes up the entire width of its parent container. After it’s reached the edge of the container it’ll drop below the other elements. So, even if you only have one paragraph in the <body> then it will still take up the entire width of the browser. That is, unless you’ve set a width for the body. It also means that if you have short sentences in separate paragraph tags, each paragraph will start on a new line.

A few of the most common block level elements are:

The image below showcases the behavior of block level elements. All the paragraphs have a green border applied so you can see the width of the elements.

Learn More About Block vs. Inline

Have we piqued your interest about the differences between inline and block elements and how they can be used to give yourself more control with your CSS? Yes? Good!