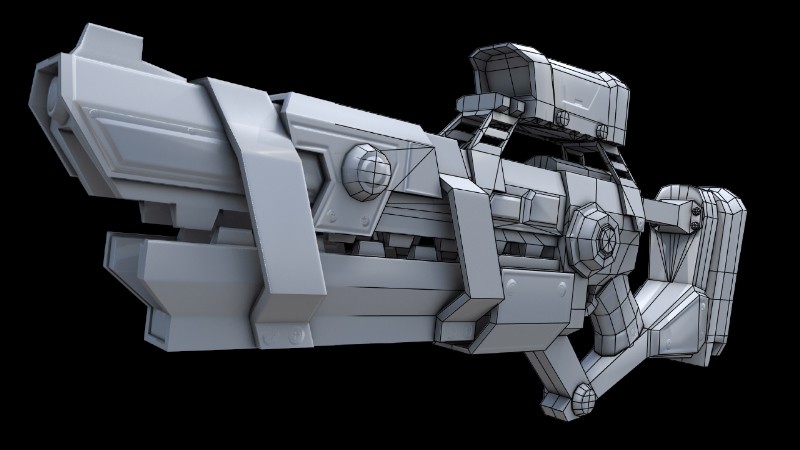 3D modeling in any medium typically uses many of the same techniques and tools to achieve great work, whether it's Maya or 3ds Max. However, just because modeling for games and modeling for movies is extremely similar in the techniques, the processes can be different and so are the limitations between the two. This article will present the main differences, and you'll have a better understanding of why 3D modeling for games can be considered a whole different monster.

Why Modeling for Games is Different

One of the biggest and most obvious differences between the two is the ever-present polygon budget that's found in any game development process. When it comes to modeling for movies, whether it's an animated feature like Toy Story 3 or a live action film with CG integrated in like Pacific Rim there's not really a limit on the amount of polygons that can be in any given model.

For movies, often times the only constraint you have is time. Like any other production, movies have deadlines which must be met. This means you'll need to be able to produce great looking models on time and on budget. In movies you've got free range to use however many polygons it takes to get the model to look good on screen because, in the end, that's what matters the most. For games it's different because you're limited by the power of the game engine and the hardware it's being played on. Of course, hardware is constantly advancing, and with consoles like Xbox One and PlayStation 4 the graphical capabilities have increased. But even with next-gen consoles today there's still a strict polygon budget that must be met in order for the game to be able to play smoothly. Games are rendered in real-time right in front of the player, so in order for the game to run at a constant frame rate and maintain it throughout the gameplay, the 3D models must be created at a level that's not taxing on the game engine. As you're playing a game there can be thousands of different assets all being rendered at one time on the screen, taking a lot of processing power. Unlike movies, games don't have the luxury of being pre-rendered. After all, it wouldn't be very fun to play a game that took hours, minutes or even seconds to render each new frame on the screen every time you moved your character. For many games, a lag of a few seconds can be the difference between life and death. You've probably seen a cinematic intro for a game before and were blown away by how great it looks. As you've probably found out, pre-rendered cinematics usually don't portray accurately what the graphics look like in-game. This is simply because it'd be impossible to be able to render that amount of detail in real-time. 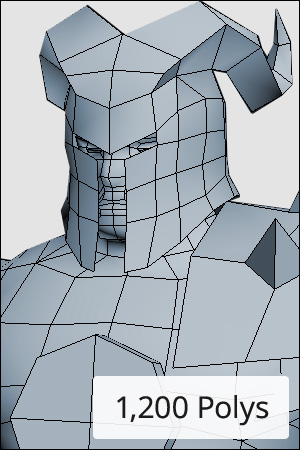 The original PlayStation required a lower poly count than is popular with current gaming systems. The above image is an example of the low poly count that could be found with these earlier generation game models.

As you can tell, just a few extra polys can add a ton of details that previous generation consoles couldn't handle. With new technology like the PlayStation 4 and Xbox One being released, that means the average gamer's system will be able to handle more polys.

The amount of polygons that can be put into a single model has increased greatly and it's obvious even in the example PlayStation and PlayStation 3 models above. There's obviously a huge increase of the available polygon count for an asset. That doesn't even take into account the new PlayStation 4 and Xbox One limitations, that have raised the bar even further beyond what the PlayStation 3 could do. With some of the recent releases like Ryse: Son of Rome you can argue that the line is growing thinner and thinner between the quality of games and movies. To contrast the real-time requirements of a game, Pixar's Monster University it took on average of 29 hours to render a single frame. The quality that was in Monster University could never be rendered in real-time with today's current technology. So even though the graphics in games is always increasing there's still strict limitations that always need to be considered when working in games. In fact, with the recent influx of 3D mobile and tablet games means the very tight polygon budgets that were once present in the early consoles is now common again. When it comes to modeling for games, it often means having to rely on the detail of the textures to push the quality of a model if there can't be an increase of polygons. Since the polygon count must be low, the artists need to find other ways to put more detail into the model, and the best way to do that is with textures. It's common in many pipelines, especially in smaller studios, for a 3D modeler to also be required to texture the assets they create as well. In movies, a 3D modeler's job is typically just to create the models, and the texture artists will handle the textures. Since the textures play a more vital role in the quality of the assets for a game, the 3D modeler is a bigger part of that process. Learning how to texture, and properly lay out the UVs for a model is an important and extremely beneficial skill to master if you want to get into games. 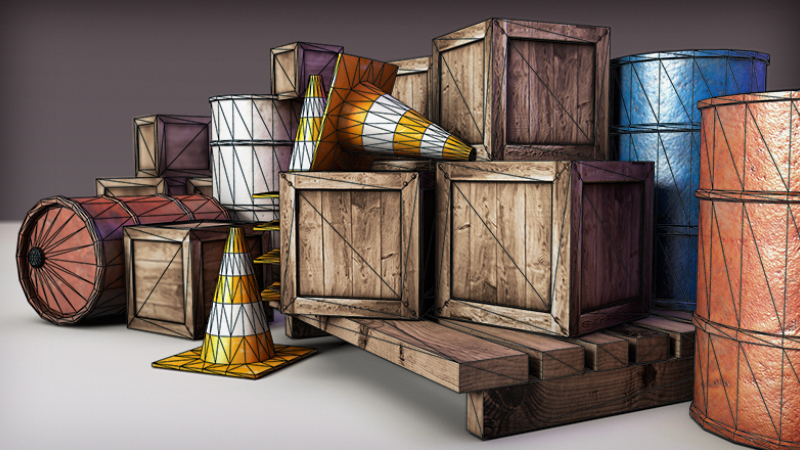 A technique often used in games is level of detail (LOD). This means there are sometimes several different detail levels for a single asset. The further the player is away from the model, the less detailed the asset is going to be, simply because they won't be close enough to tell the difference. As the player gets closer the lower resolution model will be swapped for a higher detailed asset, and continue increasing until the player is close enough to view the highest level of detail. The assets closer to the player can be at a higher quality because the game engine won't have to render everything on the screen at the highest level all at once. Of course, this means creating multiple variations of the same model at different resolutions. 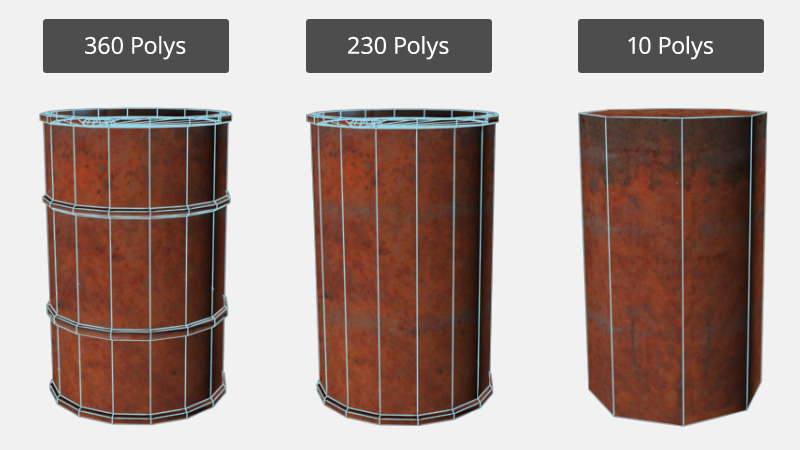 Another example of this is in a first person game, the weapons and the hands of the player will be much more detailed in the first person view than the weapons or hands of the enemies that are seen in front of the player, because those areas are closest to the camera. You may have experienced something close to this when playing an older FPS, the gun on the ground would look very low resolution, but as soon as you pick it up the weapon appears to be much more detailed. Even though you typically have more restrictions when modeling for games it is a fun and challenging path to take. You will need to be able to work efficiently, and find ways to get the most detail possible while staying within the poly count. To learn more about what goes into modeling for games, check out some of the in-depth game art tutorials.