Can you program on paper? Pluralsight author and Angular expert Joe Eames can. Eames, an ng-conf organizer, front-end development enthusiast and “paper programmer” (you can read more about that here), took some time out of his schedule to speak with us last month. And just as promised, he's back for more Angular talk with the announcement of AngularJS 2.0. This time around he gives us an inside look at ng-conf (the world's first AngularJS conference), along with his role in it and the beauty of chocolate malts. But before we get ahead of ourselves, let’s dive back into Angular.

What attracted you to Angular?

For one, it’s testable. When Jim Cooper and I were building the initial version of the HTML5 video player in plain JavaScript, it was getting to be too clunky and we needed a framework. We looked around for one, but Pluralsight does all test-driven development, so it needed to be a testable framework. At the time, Ember was popular, but it wasn’t testable. I'd never heard of Angular, but Jim stumbled upon it. So we looked at it, we liked it, and so we built the HTML5 player in it; and that's how both of us learned Angular in the summer of 2012.

Was Angular another big reason you came to the front-end world?

Yes. I felt like there was this big lack—all these kids were going into front-end development, but they didn’t have experience with building big apps and the importance of software engineering practices. I had that kind of experience, and was attracted to front-end development because I thought it was a lot more fun, it was a new frontier, and had lots more interesting innovation happening than in your typical server-side web development. The fact that Angular was testable, that it let you write a lot better looking, more maintainable code, and that it let you practice good software engineering practices better and easier than other frameworks was what I loved (and still do) about Angular.

What are your thoughts on what's happening with Angular now with the announcement of AngularJS 2.0?

I'm a huge fan of it. There’s a lot of fear about Angular 2.0 not being backwards compatible, but I don’t believe it needs to be.

Why doesn't Angular 2.0 need to be backwards compatible?

That’s reassuring news about Angular! And what news can you offer for this year’s Angular conference (ng-conf) 2015?

Well, there's going to be a StarCraft tournament and that's going to be my favorite thing. We're going to have some prize money and get a couple of professional StarCraft players in to play a tournament, in addition to letting the amateurs play too. But as usual, it will be an awesome premium conference: the Angular team will give about half the talks, while the top Angular minds will give the rest, and there will be lots of awesome activities and awesome food.

Sounds like an event you don’t want to miss! How did you get started with the world's first AngularJS conference (ng-conf)? Why do you consider it to be your biggest career highlight and one of the best Angular conferences out there?

Well, we don’t exactly have a lot of competition, but one of the biggest reasons it’s the best Angular conference is just because we put on a conference that we would want to go to. The fact that ng-conf is so popular obviously isn’t just due to the conference; Angular itself is extremely popular. We sell out our tickets in 10 seconds—thousands and thousands of people are waiting and watching and subscribe to find out when are tickets going to go on sale.

How do you put on a conference you’d want to go to? 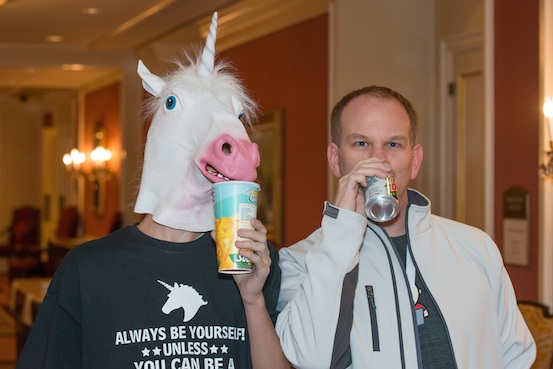 Joe is discussing the pros and cons of dependency injection vs service location with the ng-conf Unicorn. He had some amazing insights.

Do you have a favorite experience from one ng-conf in particular?

There were probably two things at ng-conf that were my favorite. One was getting chocolate malts delivered to the office while we were intensely working. You start getting thirsty and so you call up to room service and say, "Hey, I need a chocolate malt." And a chocolate malt shows up. The other experience was the standing ovation for the Angular team. To see that all the things we put together have taken this amazing product that these guys have built and given them a platform to stand up there. It's no longer somebody at Google that you might see their profile picture now and then, but it's actually people in the same room that all these attendees get to stand up, applaud and say thank you for what they've done. Now, we can’t promise you a personally delivered chocolate malt at this year’s ng-conf (well, maybe -- you never know), but we’re sure Joe can promise you a great time. Hope to see you there!