Drawing the human ear can be tricky because of the contrasting forms that make up its surface anatomy. At first glance it can be difficult to decide where to begin drawing the ear because of the nature in which these forms interweave with one another. If you want to learn how to draw ears, the best approach is to break down the surface anatomy into simple outlines and shapes. This will allow you to begin thinking of how these shapes plug into one another. Using this method will provide you with a stronger sense of the ear's surface construction and will improve your ability to draw the ear at various angles. Before you begin to break down the surface anatomy in this fashion it's important to note that everyone's ears are different just as everyone's lips, noses and eyes are different. The overall construction will be the same but there will always be some variation between different people. It's the variation of surface anatomy that makes us all unique and special.

How to Draw Realistic Ears Step by Step:

As I begin to sketch out the ear I like to begin with the helix. When it comes to breaking down the surface anatomy of the ear, the helix is a great place to start because it allows you to define the overall contour of the ear before sketching in the remaining shapes to detail it out. The helix is a semi-tubular formation of cartilage that looks like a hook-shape that loops around a majority of the outer parameter of the ear. You could also think of it as a backward C-shape as well. The overall bend and thickness of the helix will vary depending on the person. 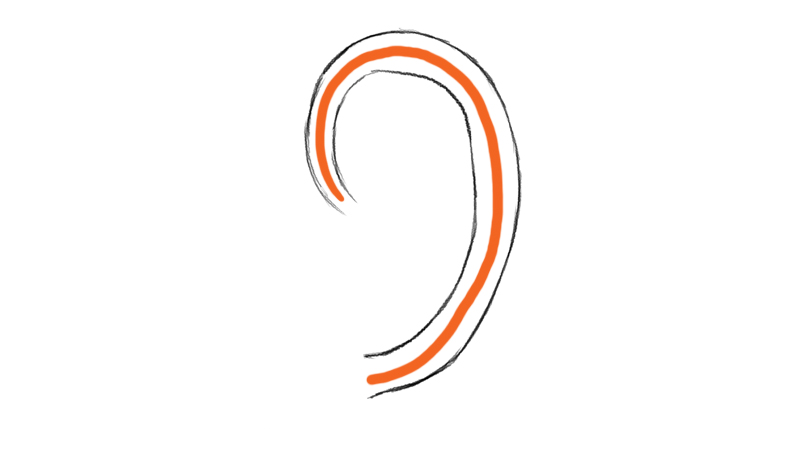 From here we can now focus on the anti-helix of the ear which can be visualized as a bent or curved Y-Shape that sits within the hook-shape of the helix. The base of this Y-shape will end relatively close to the base of the hook-shape for the helix. For some people part of the anti-helix will protrude further out beyond the helix. This is noticeable if you are looking at someone from the front view. The anti-helix is also another feature of the ear's surface anatomy that will very depending on the person. For some the Y-shape of the anti-helix have varying degrees of definition. The overall bend of the shape will vary as well. Now that we have visualized a couple of forms as simple shapes for the ear's surface anatomy we can take a moment to discuss how they connect together. The outer rim of the anti-helix will gradually recess underneath the outer rim of the helix. This recess will vary across different people. The top branches of the Y-shape for the anti-helix are known as the superior and inferior crus. The tops of these two branches are overlapped by the helix and it hooks inward. In between these two branches is another recess known as the triangular fossa. The triangular fossa is another feature of the ear's surface anatomy that will vary from person to person. For some it will only be a subtle dip, while for others it'll be much more noticeable 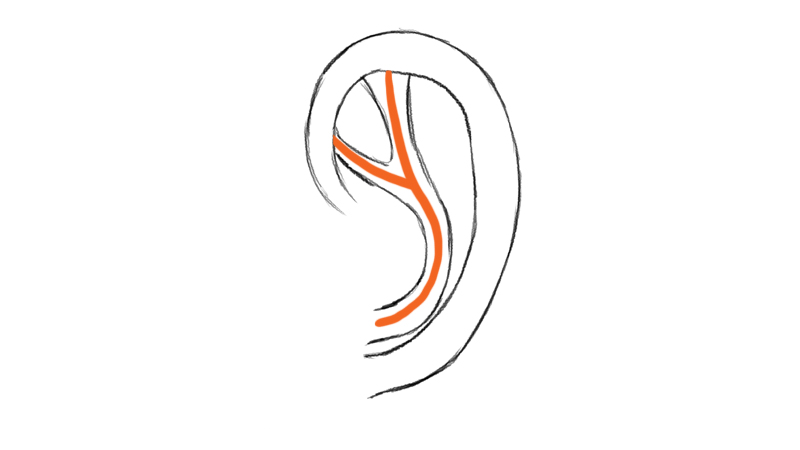 Drawing The Tragus and Anti-Tragus

Let's continue on breaking down the surface anatomy of the ear. Beneath the part of the helix where it hooks inward we have the tragus. If you're looking at someone in profile view you will notice that the tragus appears to be a small subtle bump that is pushing inward toward the ear. When you look behind the tragus you'll see the ear canal where sound enters into the ear. There's also an opposing shape opposite of the tragus called the anti-tragus. Again, if you are viewing a person in profile view you'll see this is a subtle bump that is pushing inward toward the tragus opposite of it. The upper part of the anti-tragus will blend roughly around the base of the Y-shape for the anti-helix. The base of both the tragus and anti-tragus come together to form the ear notch. Once they're both connected you see a contour outline that looks somewhat like a U-shape that has been pinched inward on both sides. Again there'll be variation as to how wide or thin this U-shape will appear depending on the person. 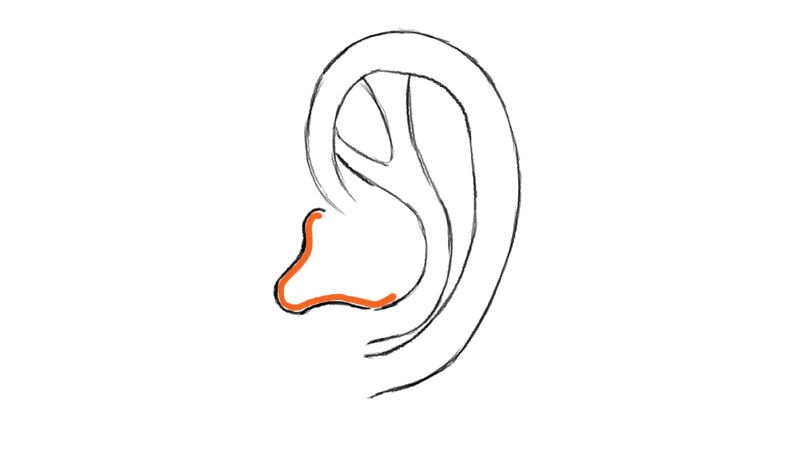 To round out the surface anatomy of the ear, we'll talk about the ear lobe. The ear lobe is a section of fatty tissue at the base of the ear. The ear lobe is another feature of the ear's surface anatomy that will vary from person to person. For some, the lobe will hang loose while for others it will connect directly into the side of the head. If you are looking at someone from the profile view you can easily break the lobe down into a simple circular shape. If you are drawing the ear from a profile view and you want to further nail down the overall outer contour of the ear then you could start by sketching both the helix and the lobe. 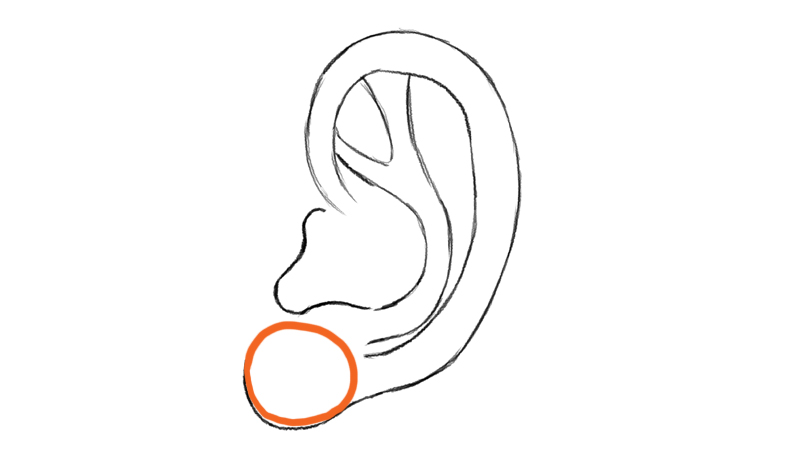 Ear Placement On The Head

Now that we've discussed how we can construct the ear by visualizing the surface anatomy as simple outlines and shapes you should also be aware of how the ear sits on the head. This will help you avoid placing your ear too high or low on the head in addition too far back or forward. For example, the top of the ear will line up approximately with the brow and the bottom of the ear will line up with the base of the nose. If you visualize the cranium as a circle that has been divided this will also help you place the ear horizontally. If you're not accustomed with drawing the human head and it's features, we recommend checking out our course  on Methods for Drawing the Human Head. The ear also sits at an angle on the head. This is noticeable when viewing the head in a profile view. The ear lobe will be positioned further in a direction toward the facial features that the helix will. The hook-shape of the helix will be angled more toward the direction of the back of the head. Additionally, the ear also sits at an angle that's noticeable when looking at the front and back views of the head. This is because of the concha which is the tissue that connects the ear to the head. The top part of the ear is typically angled out much further because the concha is thicker at the top and thinner at it's base. Some people's ears stick out further than others depending on the thickness of their concha.

Finally, it's important to keep in mind that the human ear is very much so a three-dimensional piece of anatomy. As you begin to shade the ear think of the different shapes, forms, and recesses that make up the surface anatomy. A good example is the helix and anti-helix which are semi-tubular forms. So you definitely want to put that into account when shading them. 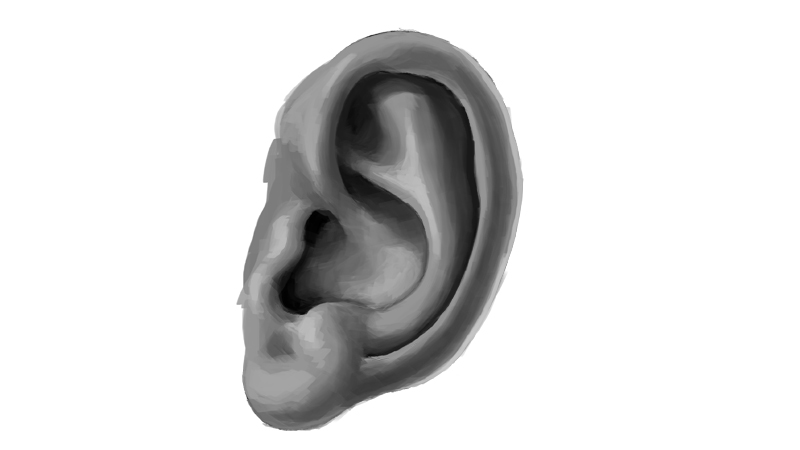 Ear drawing isn't easy right way, but by gaining an understanding of how you can easily construct the formations that make up the ear you'll be able to draw them with more confidence on your own projects.