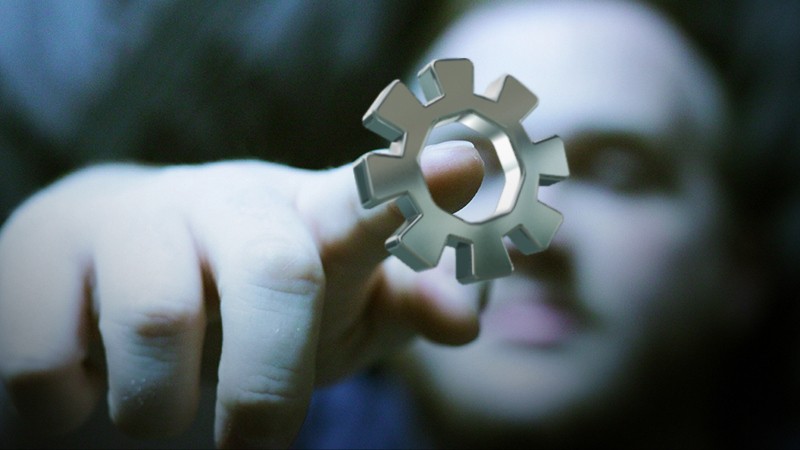 One Switch to Rule Them All

There's a switch in After Effects that has the power to transform the way you work. You may not know about it at all, or you may only be using it at half its capacity. Get ready to take a comprehensive look at the Continuously Rasterize switch for vector layers, AKA the Collapse Transformations switch for composition layers. Now right away, you may be wondering why this switch has two names? Let’s first understand how this switch relates to vector layers.

The switch has the same underlying action but with different outcomes depending on what type of layer you use the switch with. The usefulness of this switch is to make vector layers look clear, no matter how the layer has been scaled up or down, or moved one way or the other in 3D space. But why? What is actually happening that causes this phenomenon? By turning on the switch you're telling After Effects to no longer treat this vector layer as it would a pixel based layer. When pixel based layers are scaled up the information there is absolute. The pixels will simply occupy more space and become blurrier and blurrier the bigger the image gets. When continuously rasterize is checked on, After Effects is now considering the algorithm that is associated with the vector file. So, it can now continually smooth the image by recalculating as the image is resized. Each frame that the image changes, it will be recalculated. That’s pretty awesome! So let’s say that you have an image of an astronaut that you designed in Illustrator and you want to scale it up to 200%. Because the original software (Illustrator) that you used to create the image is vector based After Effects will look at the vector data and use it to smooth the edge of the image. 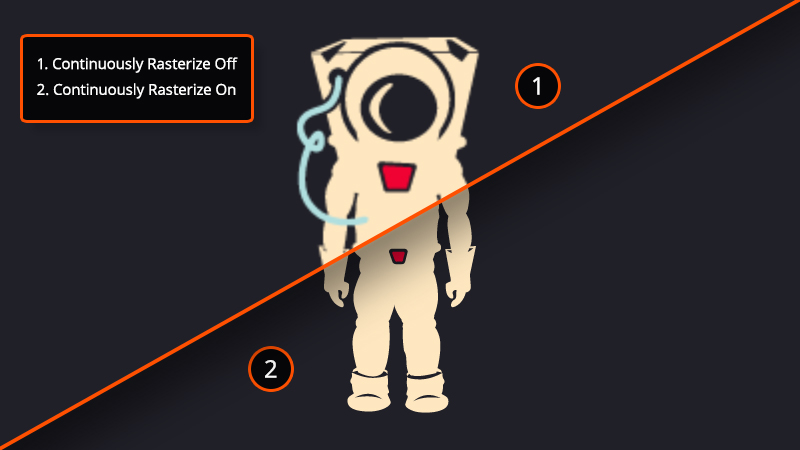 Issues to Overcome, Pertaining to the Order of Operations

Now, sometimes effects, masks and layer styles can start to have issues when you're playing around with this switch, but it's on such a case by case basis that discussing them all here might not relate to your projects. There are simply too many variables to discuss all the scenarios when it will and won't work. However, let's just quickly look at a general idea of why the errors, meaning a disabling of the effect etc., happen at all. The order of operations is the order in which After Effects renders the pieces on your timeline that make up your image. Normally, when the switch is not turned on, operations occur in the following order: masks, effects, transformations, and layer styles. This happens as the layers in the stack are being rendered from bottom to top. When you have the switch checked on, it's telling After Effects to change that order of operations. The order will then be calculated with transformations being calculated first followed by masks then effects. When transformations are calculated first, (Position, Scale, Rotation, Anchor Point, and Opacity) and the effects are calculated second, you may see some unexpected changes relating to the layers with the switch turned on. So now that we understand that using the Continuously Rasterize switch with a vector layer changes the order of operations, let's move on to what this switch can do for your composition layers.

Let's say that you have the astronaut again, but this time he has multiple layers to make his image. This is a totally plausible example in the case that you might want to animate some movement for the astronaut graphic and you need a few layers for the arms and legs and torso, so that they can move independently from each other. Now, you also want the astronaut, as his arms and legs are moving, to also move across the screen so that he looks like he is floating through space. You want the astronaut to look smooth so you check on the Collapse Transformations switch for each of the arm, leg, torso, and head layers. Now, you decide to pre-compose all the astronaut layers so that you only have one layer’s position to deal with while all the other pieces are executing their positions inside that precomp. So, you pre-compose the astronaut, and then you decide that he is a little too small. So, you scale him up. Uh Oh. 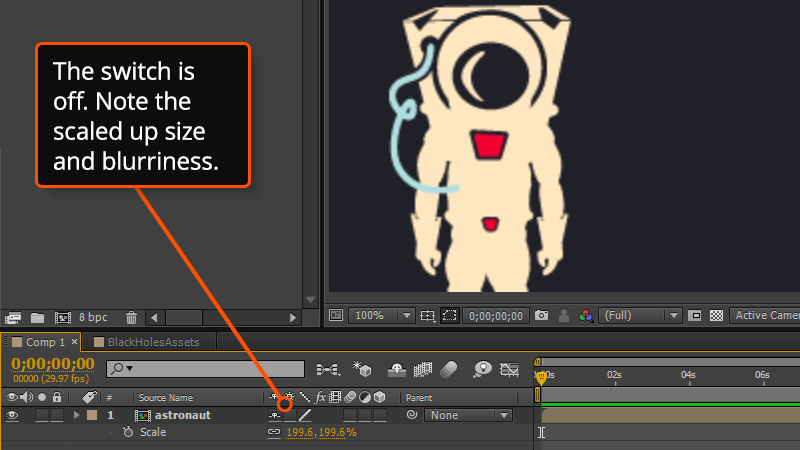 Why isn’t the Continuously Rasterize switch smoothing him anymore? The answer is that now you must also turn on the Collapse Transformations switch so that After Effects can use the vector data inside the composition. When you turn it on, the astronaut now becomes clear. This looks great, but wait there’s more! 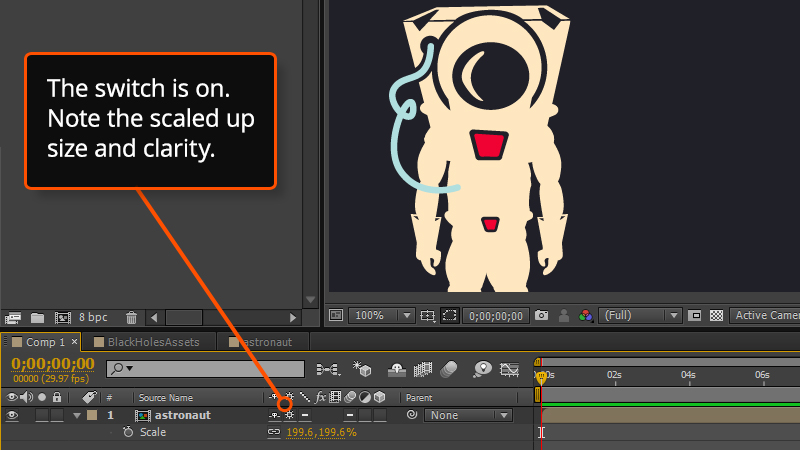 The Collapse Transformations Switch Is Just Getting Warmed Up

Another type of data that the switch can show is 3D layers. Let's say that you have a 3D looking holograph graphic that you want to put into a shot. 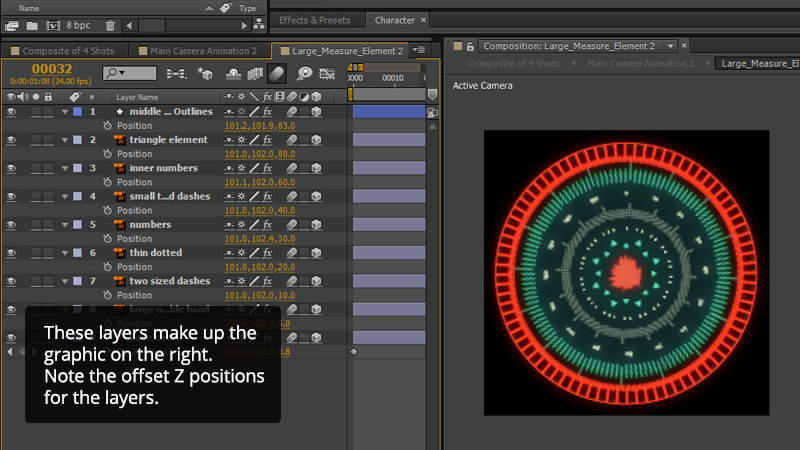 You offset a few layers in 3D space. Now, you are ready to add them to your shot so you pre-compose. At first, it looks like you’ve lost your 3D image and it appears flat. All you have to do to get it back is flip on the trusty Collapse Transformations switch for your comp layer and you’ll get your 3D offset back.

Understanding the power of Continuously Rasterize and Collapse Transformations is a great way to get better at working with vector layers and nested comps in After Effects. You might run into issues that can be easily solved with this one little switch. Before you start rethinking the way your project fits together, experiment with the switch and see if it provides a quick work around. If you have any questions about some of the limitations of the switch post your questions to the After Effects section of the Digital-Tutors forum. Is there anything you think is especially great about this little switch? Please post in the comments below!