Photoshop has so many tools that it can quickly become confusing which one should be used to accomplish a certain effect or task. You've probably seen the little eraser in your tool bar and wondered a little bit about it. The Eraser Tool in Photoshop can come in handy, but it definitely has some pitfalls.

There are three options to choose from when you choose the Eraser tool, the Eraser, Background Eraser, and Magic Eraser. I’m going to point out the differences between them to help you begin to understand which one you might want to use. It’s important to note, however, that the Eraser tool is a destructive tool. What that means is whenever you use the Eraser tool, the work that you do is permanent. There’s no way to get it back unless you keep telling Photoshop to "Undo". If you realize you made a mistake after already saving, then you’ll probably have to start over. Think of the Eraser tool as a real eraser. If you erase something in the real world, it's gone. You might wonder how you can get rid of things that you don't want in your image if you don't want to work destructively. It's as simple as adding a layer mask to the layer that you want to alter and using the Brush tool to mask out what you want to hide. You'll be able to quickly change any mistakes by using a layer mask.  The layer mask also shows you what’s being masked. If you use the regular brush and mask with black, you can achieve the same effect as using the Eraser tool. If nothing else, by the end of this article you should understand that although the Eraser tool seems helpful, what you can do with it can be replicated in more efficient ways, like with a layer mask. Duplicating the layer that you're working on is a must if you plan to still use the Eraser tool, just in case you'll need to start over.

The Eraser tool is essentially a brush. You can change the size, hardness and spacing, just like any other brush. It's also possible for you to change the mode from Brush to Pencil or Block. Instead of painting on the pixels of your image, however, the Eraser deletes the unwanted pixels. Those pixels are now permanently erased and can only be brought back to life through "Undo". It will look like you’re actually painting with the background color even though you think you’re erasing, unless you remove the lock on the background layer. Remove the lock on your layer so that you can hide it and then you can see the checker pattern underneath. In the image below, I haven't unlocked the layer, so we're seeing white where we're expecting to see the checker pattern. 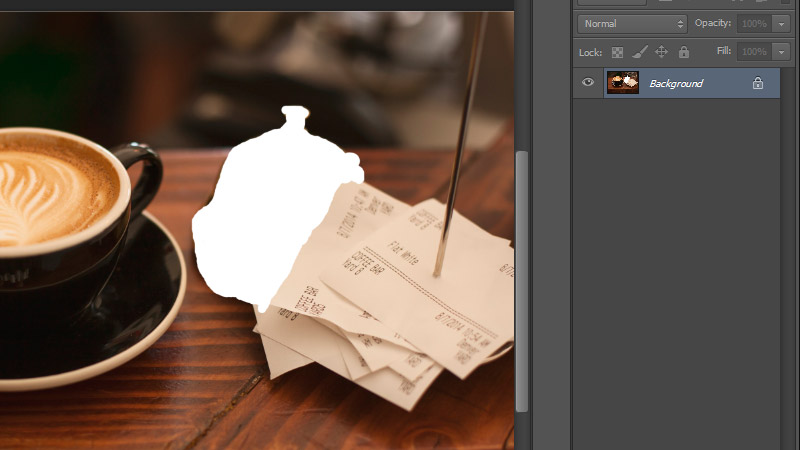 Now that I've unlocked the layer (by double clicking on it) I can go back and use the eraser to get to the checker pattern. 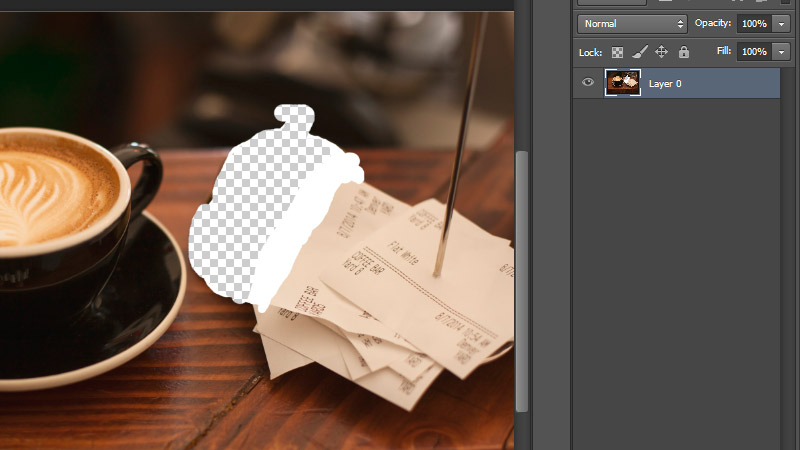 Also, if you've duplicated the layer you're working on, make sure you've hidden the duplicate layer as well or you won't see the effect of the Eraser. The hot key for the Eraser tool is “E”.

The Background Eraser tool is different from the Eraser tool. As soon as you click, the tool and cursor will change to a circle with a + in the middle. By default, the way the Background Eraser tool works is by sampling the color that's directly under the + in the center of the circle. So Photoshop will erase all of that color that falls within the larger circle. Even if the circle extends to a part of the image where you don't want to erase, Photoshop won't erase it unless the little + touches the different color. In the image below, I've accidentally ran over the puppy with the + with the Background Eraser.  If the + gets to the puppy, it will erase him it’s constantly sampling the pixels and colors. 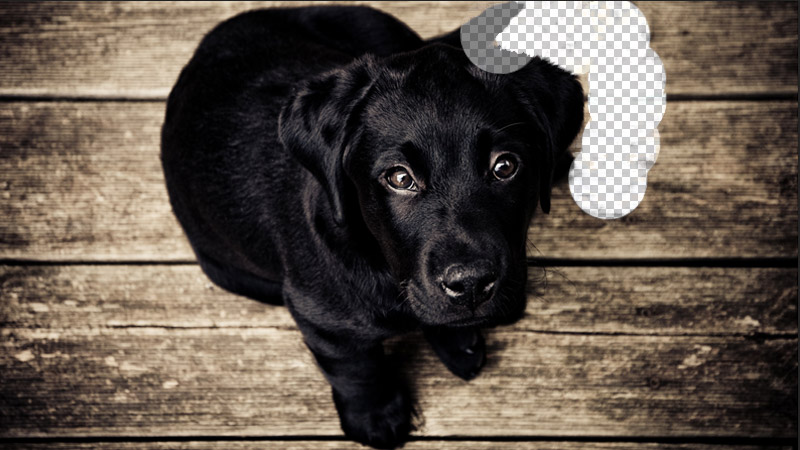 Notice how it's erasing pretty well around his ears before the mishap. Remember, since I've been clicking and dragging for what's erased in the image, all that has been erased is only one action. To undo the mistake at the top of the puppy's head I'll have to undo everything I've done so far. There are options available when using the Background Eraser.

The first option is to change the size of the "brush." The second option (that starts with two eyedroppers with a gradient below) lets you choose if you want the Background Eraser to work continuously, once, or through a swatch. The first option, continuous, is what was used in with the picture of the puppy. The continuous option works really well when you're trying to erase a multi-colored background. Once will erase the color that you tell it to by clicking. Wherever the + is when you've clicked is the color that Photoshop has saved and knows to erase when you start moving the circle around the image. The Background swatch option lets you assign a Background color swatch in the Tools palette and then the Background Eraser will only erase that color. The next section is Limits, which has three options, Contiguous, Discontiguous and Find Edges. Contiguous will only erase pixels that are touching the pixel under the +. If you need to erase something that has barriers like hair or branches, the Contiguous option can be frustrating. The Discontiguous setting will erase any pixels that match the color you're erasing even if they're not in the same area as the +. Find Edges works like it sounds it does, it erases up to edges that it finds. Tolerance is the next section in the Background Eraser options. All that means is the higher the Tolerance setting, the more variations of the sampled color Photoshop will erase. If your background color is similar to what you don't want to erase then you'll need to have a low Tolerance. It's a good practice to start lower and work your way up anyway. Protect Foreground Color lets you select the Foreground color in the Tools palette and then Photoshop will protect that color when you're erasing. If what you're trying to protect is similar to the background, but just a few shades different, then the Protect Foreground Color checkbox should be checked. 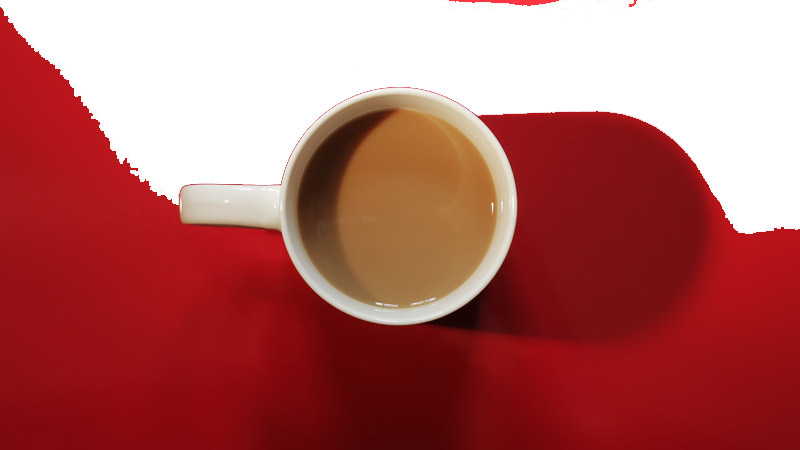 In the image above, I've clicked the mouse once on the red background while using the Magic Eraser and this is the result. Notice how it's a choppy selection and still leaves a slight red border around the mug. The image below is an unaltered version of the coffee mug, just so you can see all the red that Photoshop didn't remove. 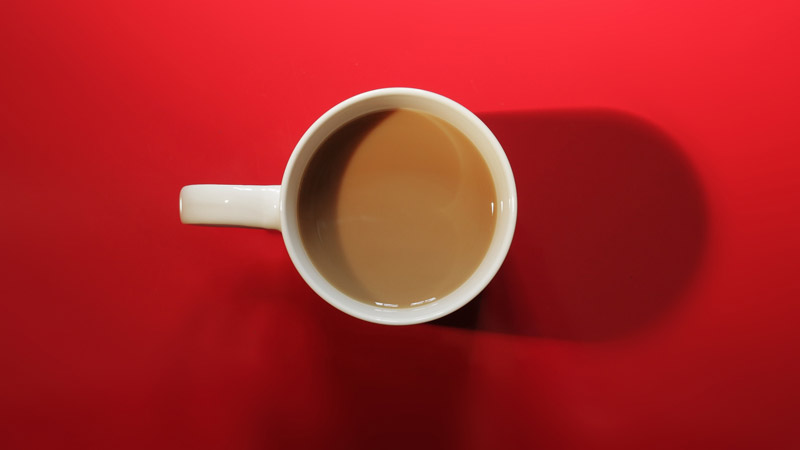 Something to note is that you can't use the Eraser tool on Smart Object unless the image is converted to raster.