How to use the Explosion FX modifier in CINEMA 4D

When it comes to motion graphics, CINEMA 4D has really become the go-to application. There’s an endless stream of user-generated plug-ins that let you create animations and effects in a short amount of time. Not only does C4D have a strong development community, it also has some great modifiers right out of the box that’ll help you create nice effects in a matter of minutes. In this article, we’re going to look at the Explosion FX modifier inside of CINEMA 4D and go over some of the ways you can utilize this tool in your own projects. Maybe you’re working on a project where you need to blow up some text or you need to have your text reform after an explosion or, maybe, you simply just want to create an explosion effect. Because why not? Where you utilize the modifier is up to your imagination. Here's a look at what you'll be creating with this tutorial: You can apply the Explosion FX modifier to any geometry, whether it’s text, a sphere or even a character mesh. To go over the basics of this tool let’s apply it to something really simple, just a sphere, and once you know the basic parameters to adjust you can tweak the modifier to fit your needs. 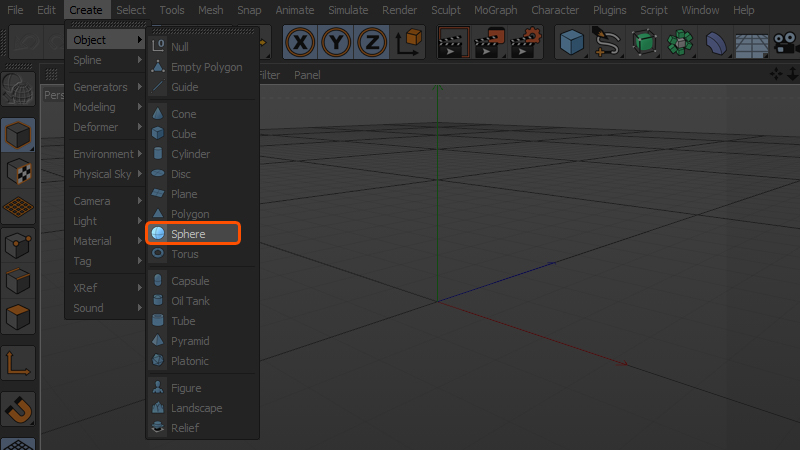 Let’s begin by first dropping in a sphere. To do this go to Create>Object>Sphere. This will drop in a sphere at the origin. Right now the resolution of our sphere is a little low so let’s bump this up a bit. 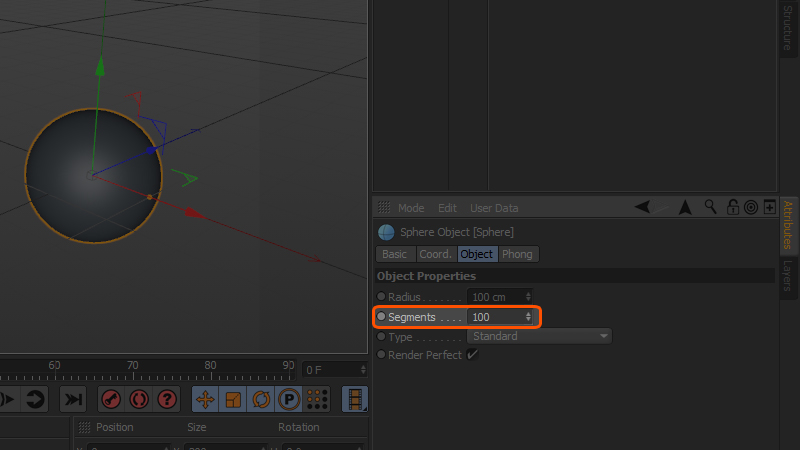 Make sure the Sphere is selected and navigate to the Attributes Panel. You should see a list of basic attributes, we want to increase the segments so choose the Object tab and dial up the segments to around 100. 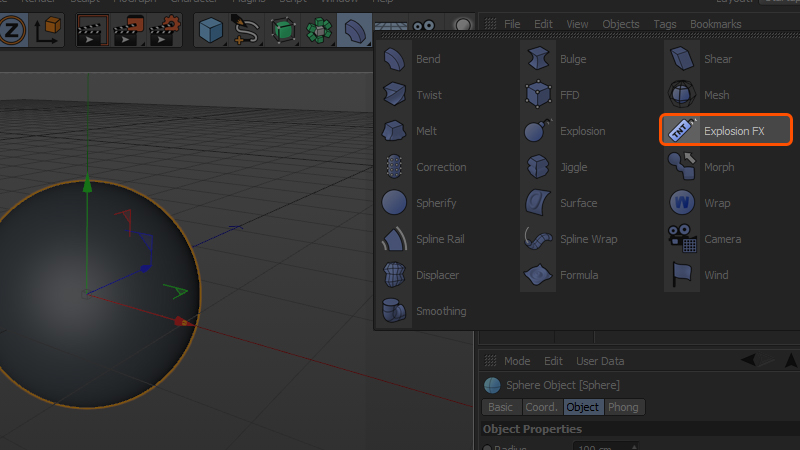 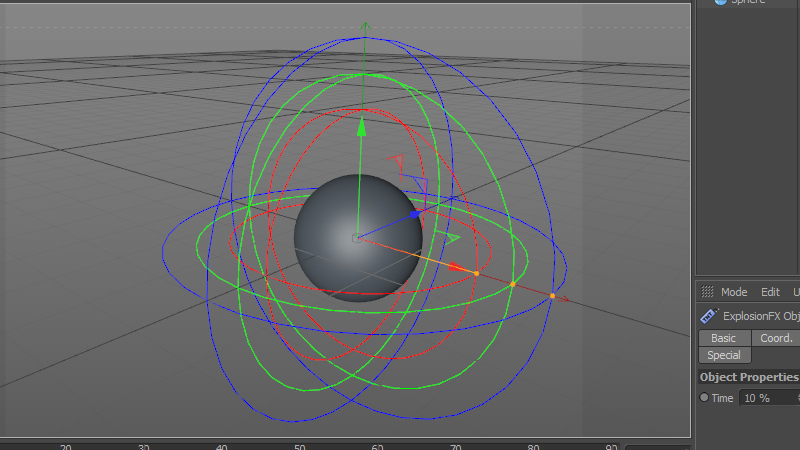 Immediately you should see three different colored curves placed inside the viewport. These are what we’ll be adjusting to tweak the explosion effect, although right now they aren’t having any effect on the sphere so we need to fix that. 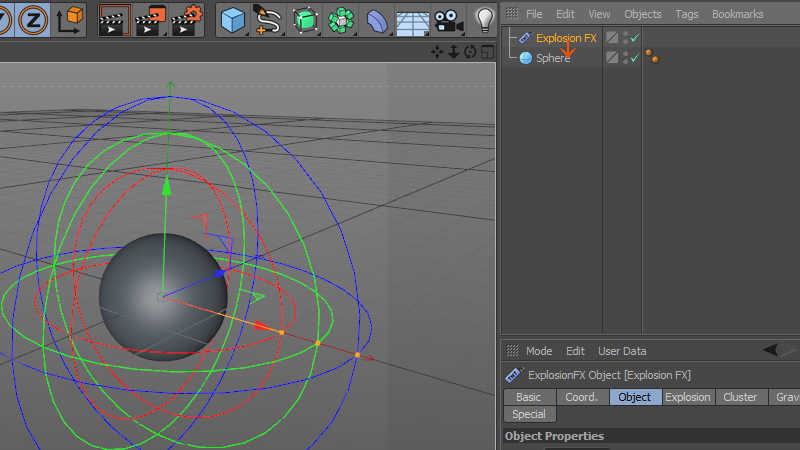 Select the Explosion FX in the Objects panel and drag it below the Sphere until you see the arrow pointed downward. 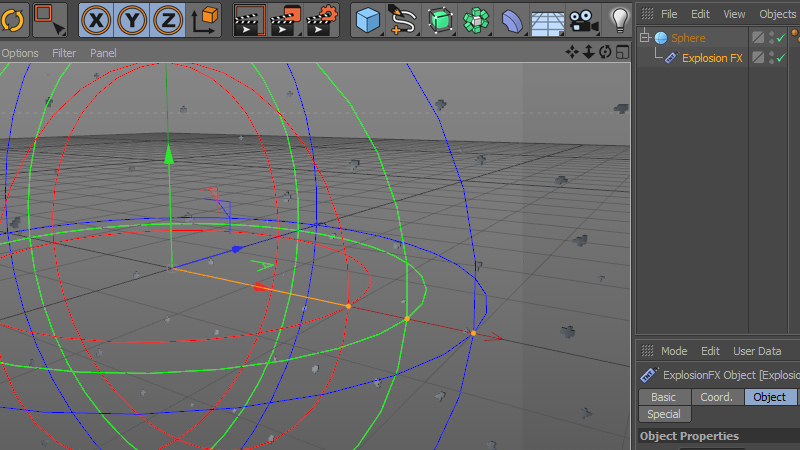 Now you should see that your sphere has been broken into lots of tiny pieces. This is the Explosion FX modifier at work! Let’s dive into some of its attributes and learn how we can adjust them to get what we want. 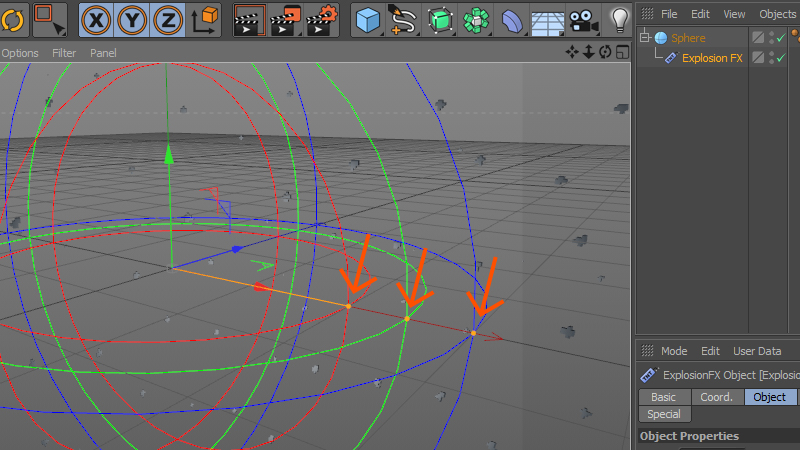 We want the sphere to explode from the inside, and right now it’s already exploded into lots of tiny pieces and that’s because the green curve is at its default state. If you look closely at the three curves you should see a small orange dot and each one of these can be adjusted. 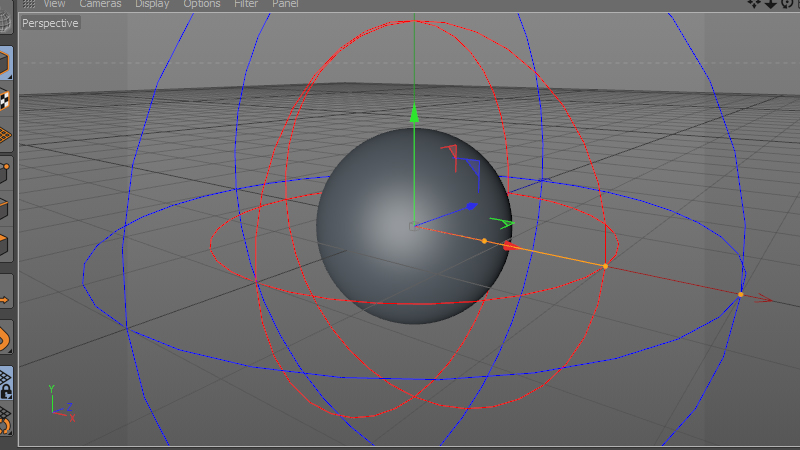 If you select the orange dot for the green curve, you can move this closer to the sphere or further way. This attribute basically controls the explosion, so if you move the green curve all the way inward you’ll notice that the sphere goes back to its original position.

As you start to move the green curve back out again the sphere begins to explode. The wider this curve is the further the pieces fly. 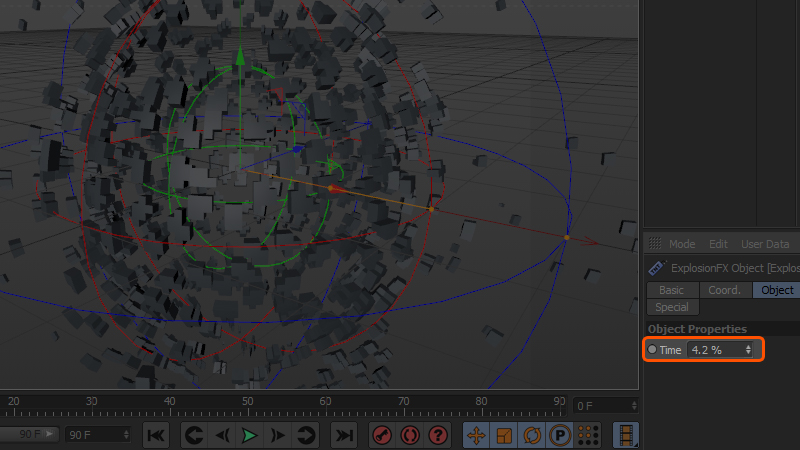 You can also adjust this property by controlling the Time parameter in the attributes panel of the Object. At 0% the sphere is at its original position, as you start to dial this up and the green curve begins to expand the sphere starts to explode.

This, of course, can be animated, so let’s do that. Set the Time to 0% and right click it and select Animation>Add Keyframe. 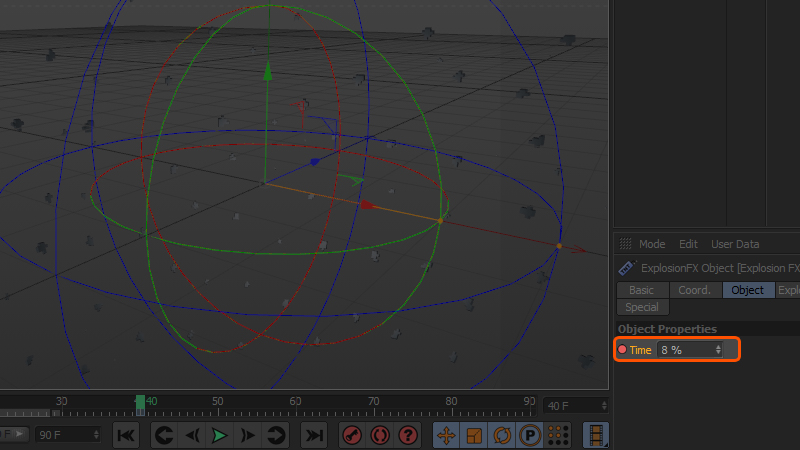 Next, move the timeline forward to about frame 40 and set the time property to around 8%, and right click the attribute and choose Animation>Add Keyframe. Now we have a basic explosion animation going on, as the sphere is exploding from the inside. The next step is to adjust how the explosion looks using the list of other properties inside the Attribute panel. 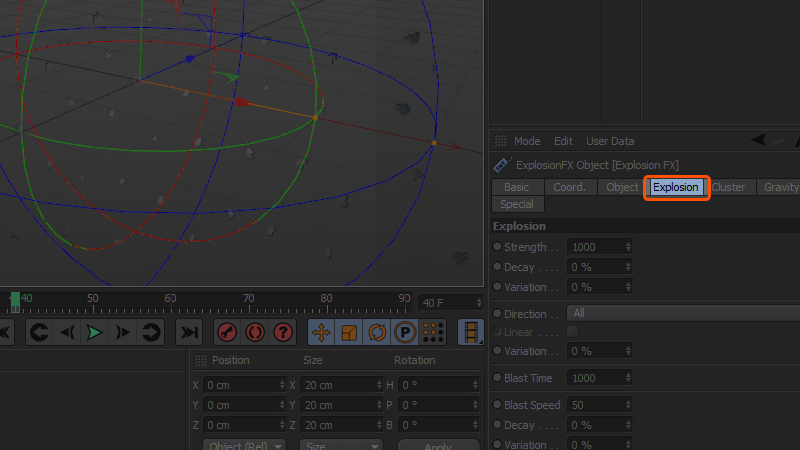 Open up the Explosion tab within the attribute panel. This is where you can adjust the look of the explosion. 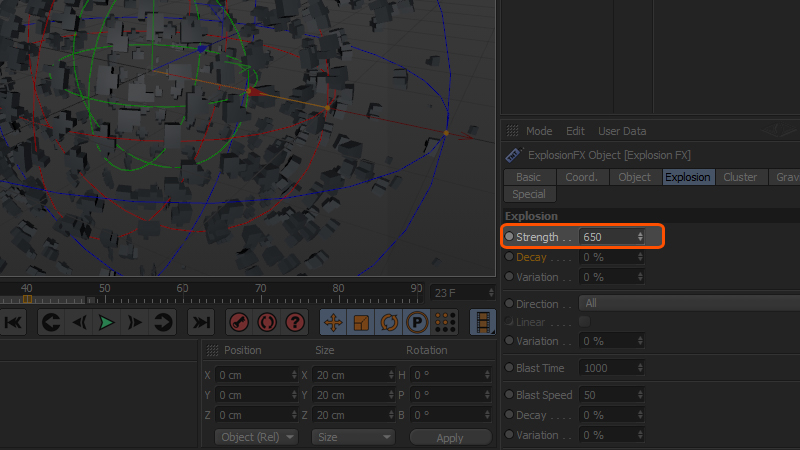 The first attribute is Strength. By default it’s set to 1000. The strength basically controls how powerful the explosion is. At 1000 the pieces of the sphere explode out with a lot of force, so I brought this down to around 650.

The Decay attribute lets you set the falloff for the Strength. At 100% it means the Strength falls to 0 by the time it reaches the edge of the blast range. With Variation it lets you basically randomize the strength for each cluster. So at 0% there is no variation while at 100% the strength can vary from zero to twice its entered value. Just for some randomization I increased the variation to 50%. 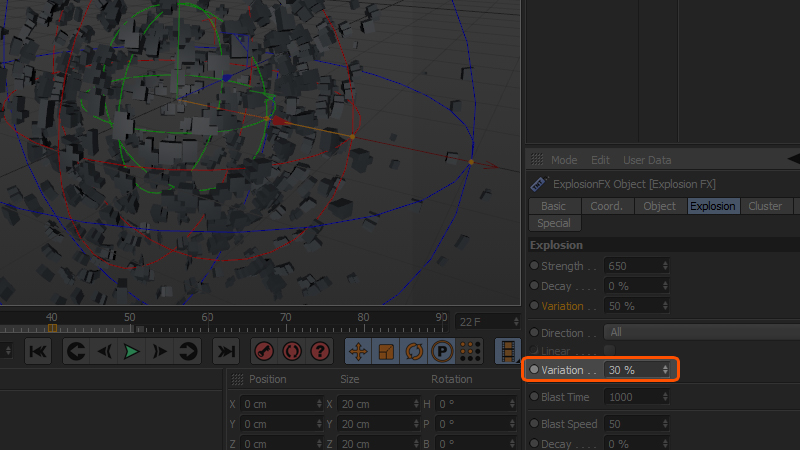 Below that is the direction. You can set this to explode in only a certain axis, or by default its set to All. The variation allows for more randomization in the direction that the pieces fly out in. I set this to around 30%. The blast speed actually controls when the pieces explode. So right now my animation takes 40 frames, and the default value of the Blast Speed is 50. This means the pieces begin to explode at around frame 20. If you set the Blast Speed value to zero the pieces begin to explode immediately, so at frame two. 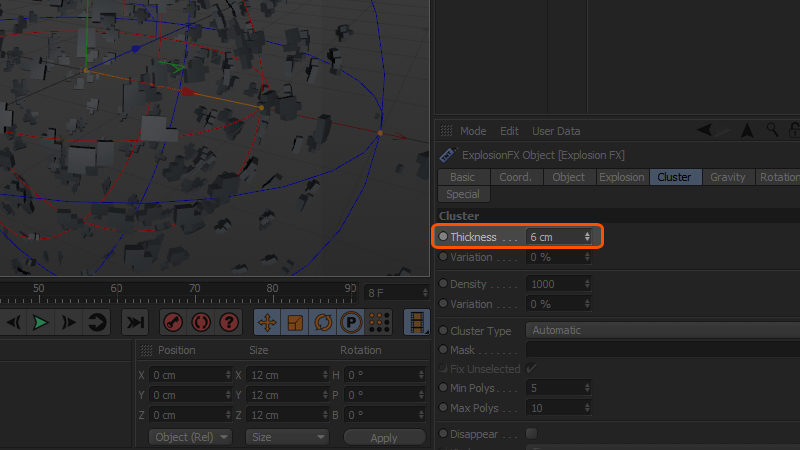 In the Cluster tab you can change the size and shape of each piece of the sphere. So by default the thickness is set to 10 cm. You can set this to whatever you like, but I set mine to 6 cm to make each piece a little smaller. 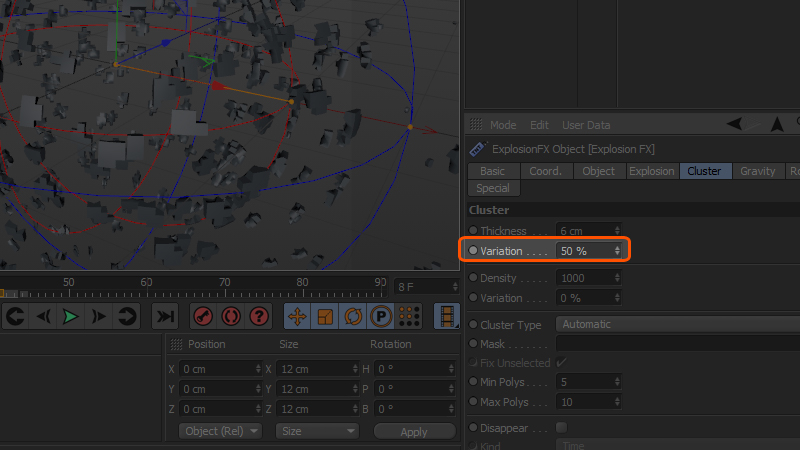 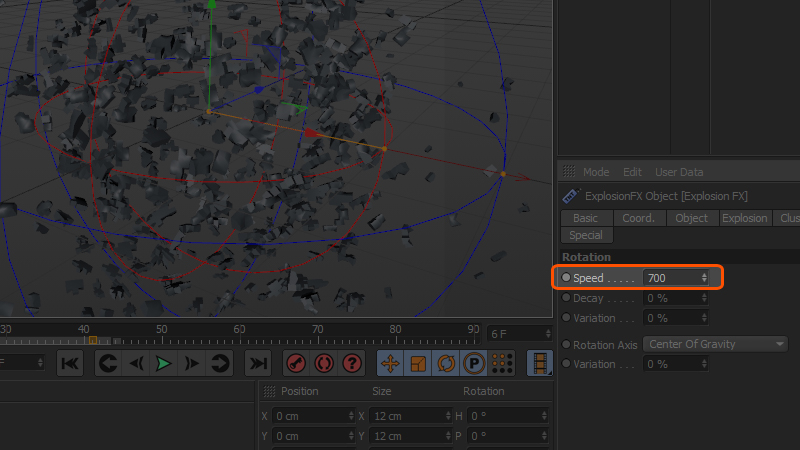 Finally, let’s jump over to the Rotation tab. Right now all the pieces are exploded, but they’re all exploding rather uniformly, so none of them are rotating. If we dial up the Speed it’ll begin to adjust the rotation for each piece. Increasing this to around 700 gives some really nice results and gives it a much more realistic feeling. Of course, the Variation will add create a randomization in the amount of rotation for each piece. While this was just a very basic example of using the Explosion FX modifier on a sphere, you can utilize it for any type of geometry and create some really great effects. Spend some time playing around with this modifier, and remember you can very easily reform the object back together by animating the green curve back toward the center of the sphere like you see in the final animation.