Like most developers, you probably have a favorite programming language. But did you know that only focusing on one language could affect not only your career, but your income potential as well? If you want to increase your salary, you'll need to learn, and become good at, using multiple tools and multiple programming languages instead of specializing in just one.

Keeping up with the market

According to Greythorn, a UK-based recruiting company, less than half of IT professionals and developers think knowing more than one programming language matters. Additionally, only 44 percent think knowing multiple languages would boost their chance of getting a job in the current market. This is far fewer than last year when 66 percent thought it would help them land a new position. And Mark Baxter of Greythorn believes this line of thinking is a mistake. “An increasing number of companies, especially those in London, are looking for flexible employees who can work in a number of functions,” Mark says. And while companies are often doing this to keep costs down, they're also prepared to pay more to get someone who can switch between projects and has three or four programming languages at their fingertips. In fact, they’re prepared to pay up to a year more for developers who can work in multiple languages. It's part of a wider trend — one that demands faster development of business software. Why wait 18 months for a new line of business tools when you can sign up for a cloud service that rolls out new features every month, especially when businesses have to be nimble and flexible in order to keep up with their markets. Projects with narrow scopes that go from original concept to fully usable applications in less than four months are the new normal, and that means developers will work on several different projects in a year. The increasing focus on mobile makes this kind of schedule unavoidable. If you take more than four months on a project, the devices users want to run the tool on will start changing under your feet, and that means you will always be playing catch up.

What languages are in demand?

Fortran and even COBOL programmers still command a premium because they’re scarce, but unless you’re only interested in maintaining older code it’s better to have expertise in the more popular programming languages. The TIOBE community index is a handy way to keep track of those. This monthly index has been compiled since 2001 and is based on the number of courses, third-party vendors and developers for programming languages reflected in the results of queries in search engines including Google, Bing, Yahoo, Amazon, YouTube and Baidu. As of Q4 2013, the top five languages were C, Java, Objective-C, C++ and C#, followed by PHP, Visual Basic, Python, T-SQL and JavaScript. 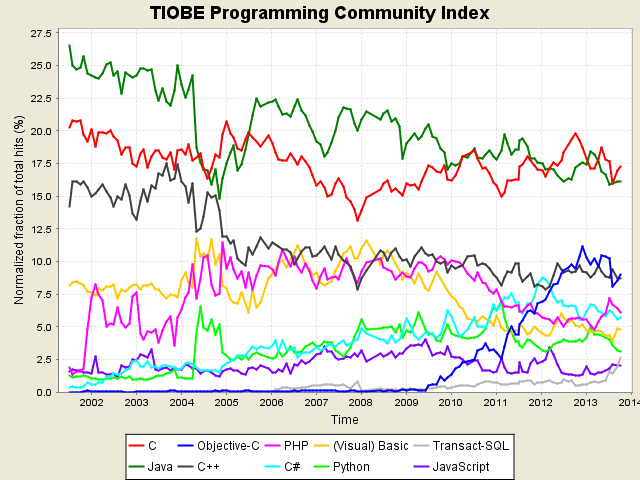 Look back over the last decade and you can see the rise of interest in mobile development. (Credit: TIOBE)

C, C++ and Java are perennial favorites, and as the programming language of the World Wide Web, JavaScript will always be popular (although in conjunction with an ever-changing selection of libraries and frameworks). But this is the first time so many Microsoft-related languages have made it into the top ten. That might be because Windows 8, Windows Phone and Xbox development are pushing C# usage beyond .NET, or because Xamarin, which takes .NET and C# cross-platform to iOS and Android, is used in an increasing number of popular mobile apps and games. Another interesting thing to note is the significant increase in the usage of T-SQL, the SQL Server SQL dialect. This suggests that more people are programming SQL Server-specific features, which is perhaps related to the increasing interest in business intelligence features or the arrival of SQL Azure on Microsoft’s cloud service.

The programming languages you need to learn should be reflected in the kind of projects you want to work on rather than what looks popular with developers. In the fall of last year, Groovy, a Perl-like object-oriented programming language for Java that’s popular for writing business rules, jumped into TIOBE’s top 20, beating out other alternative JVM languages like Scala and Clojure. But guess what. It turned out to be a bug in the way the TIOBE index was querying Chinese sites. If you had jumped on Groovy after seeing it in the index, you probably wouldn't have been flooded with job offers. So if you're thinking about broadening your skill set, make sure you do a bit of research instead of relying on one source or index, and make sure it's something you actually want to learn and will use. Just remember that whether it's for fun or profit, it's never a bad thing to stretch yourself technically and diversify your skills. Even if you stick with one main programming language for the majority of your career, being able to turn your hand to a different style of coding can give you new perspectives and reveal new options — oh, and a bigger paycheck.